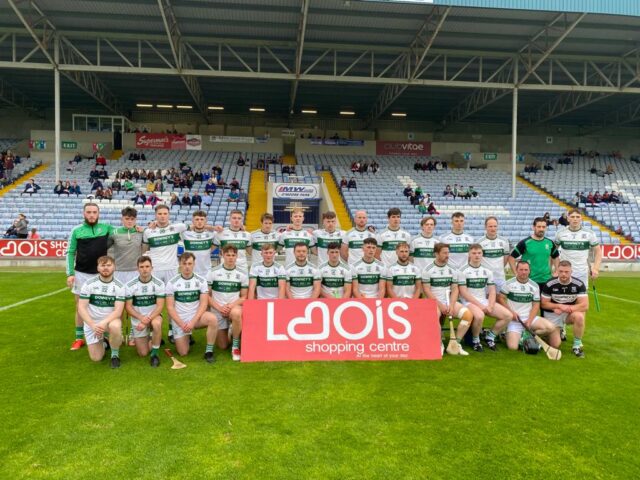 Portlaoise bounced back from their recent defeat in the 2020 Laois Premier IHC final with a comprehensive win over Camross in the opening round of this year’s competition in Borris-in-Ossory this evening.

Eight points from Aaron Bergin as well as two goals apiece from Cormac Rigney and Keith Murphy helped Derek Delaney’s side to a comfortable 19-point win over Camross’s second team in what was a repeat of last year’s semi-final.

With three teams to emerge from the four-team group, the first win almost guarantees Portlaoise a place in the knockout stages.

And it’s a somewhat re-shaped team, with Cahir Healy’s playing days with Portlaoise at an end, Tommy Fitzgerald retired and David O’Mahony, Ross Brennan and Cian Taylor (from the side that all featured in the 2020 final) all unavailable for one reason or another.

Camross’s second-string side were competitive for most of the first half here but Keith Murphy’s second goal, on the stroke of half time, left ten points between the sides at the break and there was never any doubt from there on as to who was going to win.

Camross were weakened having lost a handful of players to their senior team for their game against Rathdowney-Errill 24 hours earlier – and it was too much for a second team to absorb.

Portlaoise got the first three points of the game – from Aaron Bergin and Keith Murphy – and though Matthew Collier pulled one back for Camross, we soon had the game’s first goal when Murphy got a flick to a long-range Bergin free and the ball ended up in Cillian Tiernan’s net.

The experienced Niall Holmes responded with a fine point from play but Aaron Bergin pointed either side of an Eoin Dowling effort and then Gary Bergin pointed (and it was almost a goal) to push Portlaoise six clear. Darrell Dooley, who started at full-forward, replied for Camross but at the first water break it was 1-6 to 0-4.

Jamie Keenan hit two fine scores for The Town in the second quarter, with Daniel Delaney twice responding for Camross but Portlaoise dominated for the remainder of the half with Aaron Bergin hitting three in a row and then Keith Murphy getting in for a fine second goal. Camross’s only response was a fine point from Colin Palmer. At half time it was 2-11 to 0-7.

Dan Delaney and Matthew Collier hit back with points but the powerful Rigney rifled home his second goal to leave it 5-14 to 0-11 at the second water break.

Delaney got another for Camross on the resumption but Portlaoise got the last two points of the game – from Ciaran McEvoy and Aaron Bergin to see it out with ease.