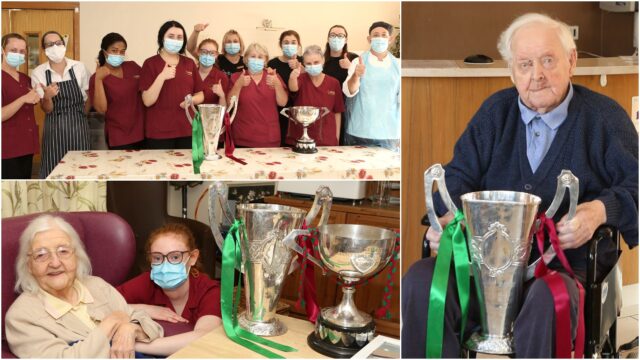 Martin Murphy, the manager of the victorious Portarlington senior football team who won the 2020 Laois championship recently, paid a visit to Oakdale Nursing Home Saturday afternoon and brought the two trophies won by his team recently.

Portarlington claimed the 2020 championship title when they defeated Graiguecullen and last week they beat Portlaoise when winning the 2021 Division 1 league.

First to greet Martin was lifelong Portarlington club member and former chairman of the County Juvenile Board, Tom O’Shea who was thrilled to get his hands on both trophies.

Tom remarked that he was expecting Portarlington to dominate club football in Laois over the next few years as they had a very talented group of young players and a great manager with a proven track record.

There was great interest among the residents in having their photographs taken with the trophies among them avid Laois football supporter Jack Kelly from Portnahinch, who turned 102 in June.

Valerie Moore, General Manager of Oakdale, said that she was very grateful to Martin for calling and brightening up the day for the residents as it has been a hard 18 months on all the elderly and the residents were very pleased with the visit as the majority have followed the GAA all their lives.

You can check out a selection of images taken by photographer Michael Scully below.

Portarlington open the defence of their title next weekend when they take on Ballyfin in the opening round of the 2021 championship.