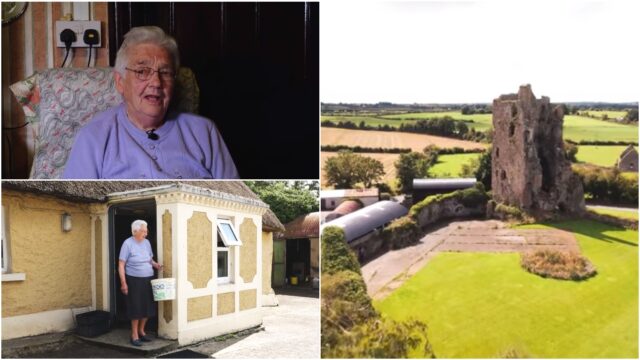 Well-known Cullohill woman Nancy Roberts is the subject of short video production by local photographer and videographer Terry Smeaton as she looks back on her life and times and the history of the local area.

Born in 1932, she will turn 90 on her next birthday, and has been living in the shadow of the famed Cullohill Castle all her life.

The video includes lovely drone footage of the rural Cullohill area as well as of Nancy in her picturesque thatched home.

For a long number of years her home was a green grocer’s and she also farmed locally with her husband and she says, with great wit, that “my tractor was a wheelbarrow and my front loader was a shovel”.

In a beautifully filmed short production, she tells her interviewer how she is the last of the Roberts family living in the area. She also recalls going to school in Cullohill – where she wrote on a slate – and to a domestic economy school in Navan.

She also chats about the Castle, which goes back to the 1400s, and how it was the home of the chieftans of Upper Ossory and was shelled by Cromwell and left in ruins in the 1600s.

While she says that technology has left her behind somewhat and she just uses her phone for making and taking calls, she knows that we’re living in interesting times now too – that the next generations will want to know about in years to come.

“In modern times you have to move with times,” she says.

You can watch the video in full below.