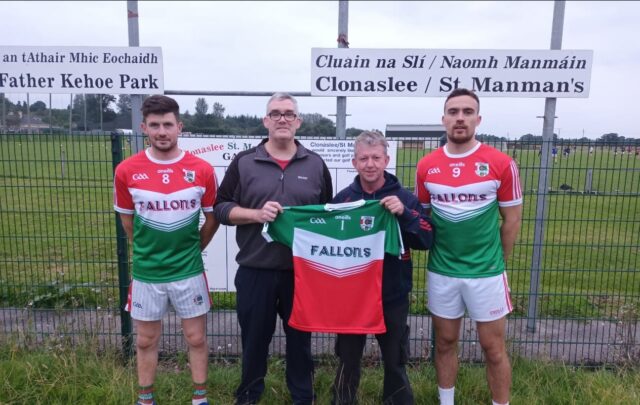 Clonaslee are through to Round 3 of the Laois SFC after they somehow managed to win a crazy game against Ballylinan tonight.

Conor Gorman’s charges conspired to miss eight goal chances over the course of the evening but came from four points down in the final quarter to win.

Niall Corbet was their hero in the end as he kicked their final three points in a two point win.

Ballylinan now head for the relegation semi final and can have little complaints because if their opponents had have been on form, the margin would have been far greater.

Clonaslee headed for the half time break three points down but they really should have been ahead as they missed five clear goal chances.

Despite playing against a stiff breeze, Niall Corbet forced two great saves out of Tom Wright and hit the crossbar with another effort.

James McRedmond saw one from close range go wide and another slam off the side of the post.

Ballylinan lost Seamus Lacey to injury early on and had Gary Walsh on one leg but he still managed to get half of their first half tally.

Niall Corbet and Bob Downey were on the scoreboard early for Clonaslee but Ballylinan were ahead through Walsh and Ciaran Farrell.

Another from Jamie Farrell and a mark from Cathail Dunne left them 0-5 to 0-3 ahead at the water break.

Corbet cut the deficit on the resumption but another brace from Walsh and a score from Cathal Leonard put four in it after 24 minutes.

Clonaslee finished the half well though as John Rigney and Liam Senior scored to leave it 0-10 to 0-7 to Ballylinan at half time.

A sixth goal chance then went abegging for Clonaslee when Corbet got through again and forced a save from Tom Wright.

Paddy Hyland made it a three point game and we were level after 36 minutes when Clonaslee finally scored a goal.

Corbet was the creator this time as he set up Liam Senior who saw his shot saved by Wright but he smashed home the rebound. Corbet and James McRedmond pointed soon after and Clonaslee led with 20 minutes to go.

But Ballylinan fought back to go three clear at the second water break.

Cathail Dunne and Gary Walsh drew them level before Ciaran Farrell turned over Diarmuid Conroy in midfield which resulted in a counter attack where Jamie Farrell got through to score.

Clonaslee missed a seventh goal chance with the last play of the third quarter as Liam Senior smashed into the side netting to leave it 1-13 to 1-10 at the water break.

Gary Walsh and Niall Corbet traded points on the resumption but Corbet and Bob Downey got the next two to leave one in it after 53 minutes.

But Ballylinan would not score again as Corbet took over and kicked Clonaslee to a rousing win.