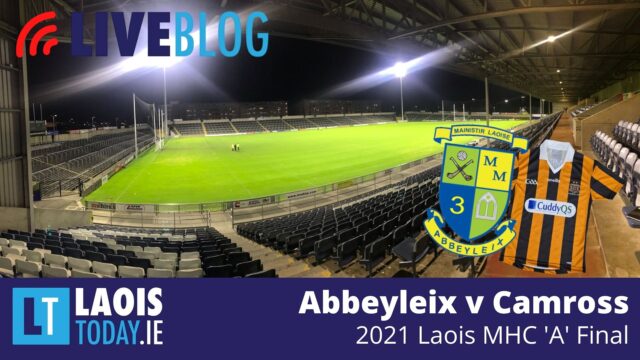 The volume of games is decreasing at the moment – but their importance is on the up.

The Laois minor ‘A’ hurling final takes place this evening with Camross and Abbeyleix doing battle in O’Moore Park.

Abbeyleix are in their third final in a row and seeking to retain the title they won last year – while Camross are going for just their third title ever, following on from 2017 and 2005.

Abbeyleix beat Portlaoise, the corresponding U-15 champions from 2019 in one semi-final, while Camross got the better of The Harps.

Abbeyleix won when the sides met in the group stages though there was nothing at stake when they met.

Alan Hartnett is in O’Moore Park for that one and will be providing updates throughout the evening. It throws in at 7.30pm.

Steven Miller is in Stradbally for the rather early 6.30pm throw in between Timahoe and O’Dempsey’s in the Laois IFC quarter-final.

O’Dempsey’s won when the sides met in the second round of last year’s championship but are coming off the back of a big defeat to Mountmellick in their last outing.

Timahoe were badly beaten by Park-Ratheniska in their first game but recovered to beat The Rock with a late goal the last day out.

They are looking to reach a semi-final of this competition for the first time since 2017.

You can follow all of the action in our Live Blog below.