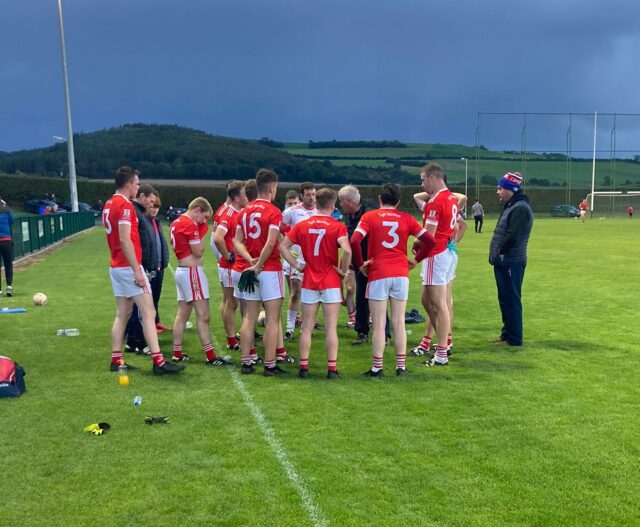 Timahoe are through to this year’s Laois IFC semi-final thanks to a 10-point win over O’Dempsey’s this evening in Stradbally.

Sean Dempsey’s side led for almost all the game as they booked their place in the last four for the first time since 2017 with a relative degree of comfort.

They won’t be overly pleased to have conceded 2-10 and the impressive Eoin Finlay, who hit 2-7, caused them plenty of problems. But they go forward to a semi-final meeting with Mountmellick in two weeks time when they will hope to be able to welcome back former Laois player Damien O’Connor who was unavailable this evening.

Timahoe’s win ensures a draw isn’t needed for the semi-final and that Park-Ratheniska will play Arles-Kilcruise in the other semi-final.

It was a decent showing from Timahoe who have picked themselves up well from the heavy opening round loss to Park-Ratheniska.

Colum Dunne finished with 1-6, Brendan Quigley was a constant threat and hit 1-4, Mark O’Connell was impressive with 1-3 while Sean Ramsbottom set the tone early on with a couple of nice points and he finished with 0-3.

Daire McDonald, Graham Devitt, Conor Whelehan and Jimmy O’Connor all impressed too over the hour.

Ramsbottom got them up and running with two fine points from distance and though Eoin Finlay hit back with an excellent goal, a left-footed Quigley point and one from Colm Lalor had Timahoe back in the lead.

And they got their first goal when Daire McDonald made good ground up through the centre and his pass set O’Connell up to round David Nicholson and shoot into an empty net. Two points from Colum Dunne and one from O’Connell had Timahoe 1-7 to 1-0 up at the first water break.

Finlay accounted for three O’Dempsey’s points in the the second quarter and Tom Behan got one with Finlay’s spectacular effort off the outside of his boot before half time a fine score.

But Timahoe were scoring at a far easier rate with Quigley getting three and Colum Dunne one to send them in 1-12 to 1-4 up at half time.

Finlay got three in a row after half time to reduce the gap to five but two Colum Dunne points and a great goal from Quigley after a long ball in from Ramsbottom helped them lead 2-14 to 1-7 at the second water break.

Big Dan McCormack got two points late on and Finlay fired home his second goal but Mark O’Connell, Ramsbottom and Dunne all pointed for Timahoe and Colum Dunne’s late goal ensured Timahoe had ten points to spare at the final whistle.