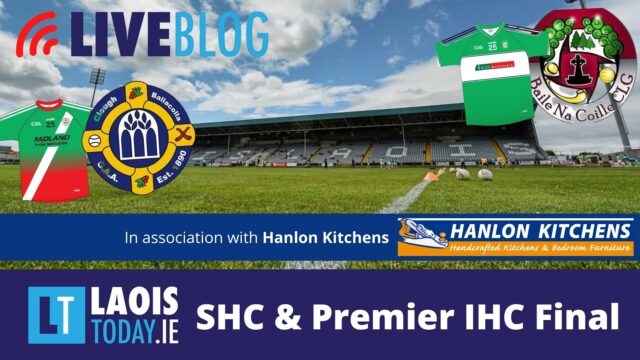 It may be later than usual but Laois hurling championship final day is here at last.

For the second season running, Borris-Kilcotton and Clough-Ballacolla meet in the Laois senior hurling final. Indeed it’s their second county final clash since they did battle back in August in the delayed 2020 decider.

For Clough-Ballacolla they have a chance to achieve the novel distinction of winning the championship twice in the same year. Borris-Kilcotton are keen to avoid the stigma of being the team that lost two.

Clough-Ballacolla are going for their fifth senior title in 13 seasons; Borris-Kilcotton are seeking a second and a first since 2016.

That game gets underway at 3.30pm with Shanahoe’s John Lalor taking charge of his fourth senior final.

The curtain raisers sees Ballyfin and Ballinakill meet in the Premier Intermediate final.

Ballinakill were only relegated out of senior last year but are looking to make an immediate return to the top table.

Ballyfin were relegated in 2018 having won this grade in 2017. That game throws in at 1.30pm with Padraig Dunne the man in the middle.

We will have minute-by-minute updates throughout the afternoon on our Live Blog below.

SEE ALSO – Check out all the weekend sports coverage on LaoisToday