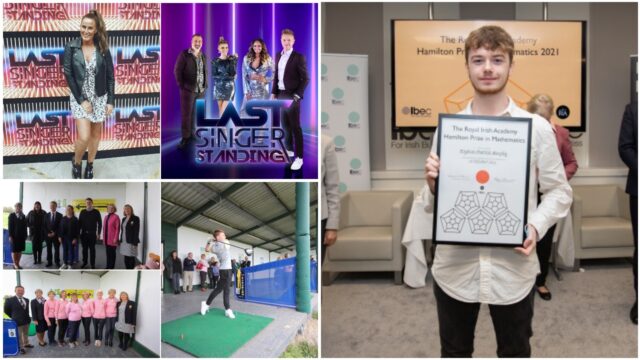 Rachael Farrell from Mountmellick will be in the third episode of Last Singer Standing, which will air on RTE this Saturday evening.

Portlaoise produced their best performance since their 2019 semi final win over Portarlington to reach another Laois SFC final.

Their accuracy in front of goal was much improved, they were tenacious in the tackle and they dominated midfield as they dismantled Ballyroan-Abbey – holding them to just two points from play.

There was also a first appearance of the season for former Laois keeper Graham Brody following an early injury to Michael O’Connell.

Park-Ratheniska will be a senior football club in 2022 following a stunning intermediate final win over Mountmellick in O’Moore Park last weekend.

The win completes a remarkable couple of months for the club after they only won the 2020 junior title back in June. It’s certainly a year that will take a fond place in their proud history.

St Conleth’s are Laois ladies senior football champions for the first time in their history following a much-deserved win over Sarsfields in O’Moore Park.

Conleth’s – drawing players from Portarlington, Killenard, Courtwood and even Gracefield across the Offaly border – were the better side from the start and only trailed briefly in the early stages of the game.

They had beaten Sarsfields in the group stages and had pushed them hard twice in last year’s championship. This was the big one, though.

Six clubs are represented on this week’s LaoisToday football Team of the Week but it’s dominated by Park-Ratheniska and Portlaoise following their very impressive championship wins.

Park-Ratheniska’s intermediate championship triumph sees them lead the way with five representatives while Portlaoise appeared to be back close to their best in their big win over Ballyroan-Abbey in the senior semi-final on Sunday. They have four players included.

Portarlington, who beat Emo in the other semi-final, have two included, as do Emo.

In an address, Men’s Captain Emlyn outlined a short history of the range and outlined the improvements made.

Planning permission has been granted for 74 new houses on the Grattan Street/Mountrath Road area of Portlaoise.

The development will be accessed close to where an old derelict service station stands and before the entrance to the Westlands estate.

The 2.59 hectare site is also adjacent to Ashbrook Gardens apartments complex and next to the railway line on one part of the site.

A young Laois student has won two prestigious awards for his outstanding achievements in the field of mathematics.

The 22-year-old, who is a past pupil of Heywood Community School, won The Spelman Prize in 2020 and has followed that by recently winning The Hamilton Prize.

Gardaí in Stradbally are investigating an incident involving a bogus caller in the area on Tuesday.

A suspicious man called to an elderly man and tricked him into buying a drill that he didn’t really want.

He then followed him into the house trying to find out where he keeps his money.

The Government has given approval to commence construction on the new extension to Portlaoise College.

This new extension and refurbishment works will consist of a construction studies room, art room and a special education needs classroom.

Laois Minister for State at the Department of Finance, Sean Fleming, said that he is very pleased that this extension has been approved.