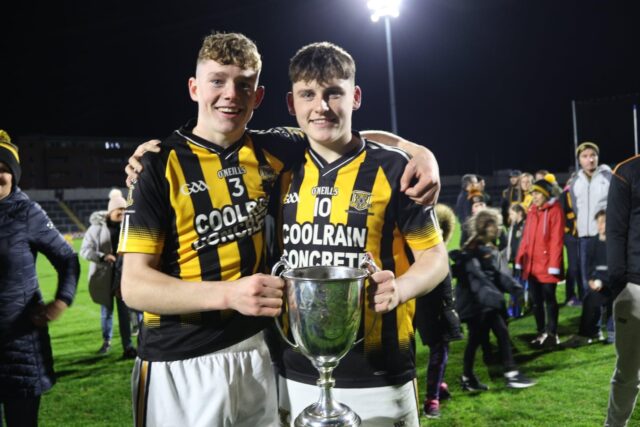 Ben Deegan was on fire as Mountrath CS got their Leinster School’s Senior B Hurling Championship off to a winning start.

The Camross native, who helped his club claim Minor glory in September, was inspired again to see off Castlecomer CS.

He finished the game with 1-12 as the Laois school made the perfect start to the competition.

It is being run this year with seven groups of three teams playing off in a round robin.

The top two teams from each group will progress to the knock out stages.

Two of these will receive a bye to the quarter finals while the remaining 12 will play in a preliminary round in a bid to join them.

Mountrath’s second group game is against Colaiste Choilm of Tullamore and if they avoid defeat there, they will progress.

Similarly, if the Tullamore side can defeat Castlecomer, Mountrath will also qualify regardless.

Mountrath led this encounter by 0-13 to 0-7 at half time and when Deegan converted a penalty after Ciaran Culleton had been fouled, their lead looked unassailable.

But the visitors refused to give up and straight from the puckout, Crettyard native Jonah Kelly got on the end of a loose ball to fire in a goal for the Kilkenny men.

But Mountrath never panicked as Culleton, Jack Breen, Conor Doran, Josh O’Brien-Holmes, Ciaran McKelvey and Jer Quinlan all pointed to allow them run out nine point winners in the end.