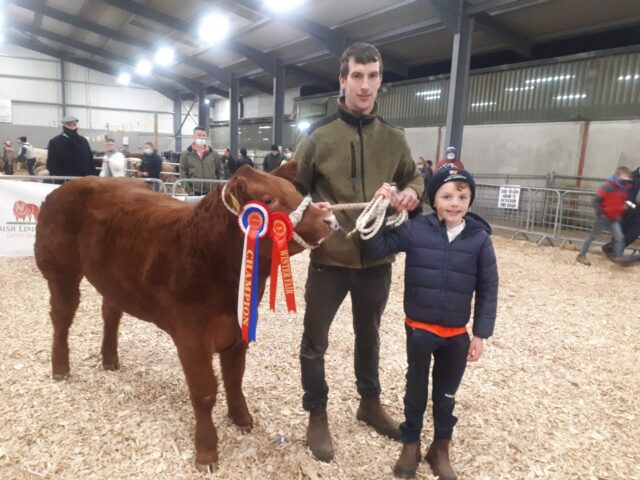 A Laois man sold a Limousin heifer for a record €18,000 at the Carrick-on-Shannon sale in Leitrim yesterday – having won the category at the prestigious Winter Fair show on Sunday.

Sean Ramsbottom from Timahoe sold the February-born 433kg Limousin heifer – crossed with a Belgian Blue – for what is being described by the organisers as a “new commercial record price” for a non-pedigree heifer.

It was also the highest priced heifer at the sale.

Ramsbottom’s seven-year-old son Jack showed the heifer at the show on Sunday when it won the Limousin female-cross calf 450kg or under category.

After winning that category, it was expected to sell for in the region of €10,000 but in the end it went for almost double that.

It’s understood that the heifer was bought by a syndicate of three cattle breeders based in Northern Ireland and the UK.

Sean, who is well known in GAA circles having played football for Laois at all levels and captained the county to Leinster minor success in 2007, also runs his own AI business in the midlands.

SEE ALSO – Laois farmers joined by colleagues from Cork, Tipperary, Kerry and Offaly as they depart on IFA protest