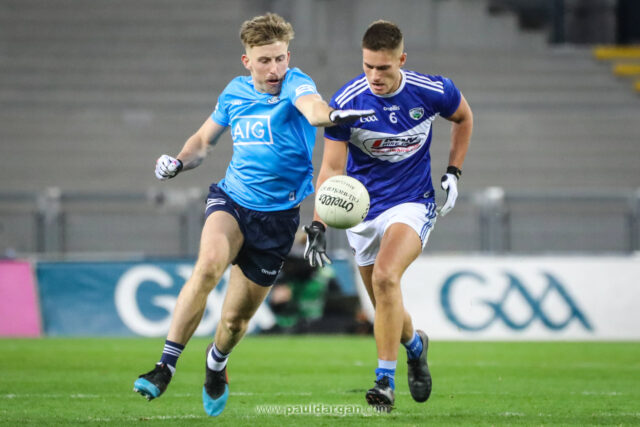 And so the O’Byrne Cup journey continues.

Laois take on Dublin in the pre-season competition in Carlow this afternoon in what is their fifth game in 15 days.

It’s been quite a busy start for Billy Sheehan as manager, a run of games that has seen them recover from a heavy defeat to Wexford in the opening game to win their next three – including wins over Meath and Kildare (albeit on penalties after they drew in normal time) to reach today’s final.

Even allowing for the fact that it’s only the O’Byrne Cup and it’s still only January the mood around the team is incredibly more upbeat than it was only this day two weeks ago when Laois had lost 6-10 to 0-13 to Wexford, their seventh game in a row to lose.

Despite the busy run of games, Sheehan and his management team have managed their panel as resourcefully as possible. In all they’ve used 34 players but today’s team – as it was against Meath and Kildare – is their strongest available 15.

The Kingston brothers are on the injured list and Alan Farrell and Niall Corbet were unavailable for the Kildare game because of injury – but Danny Bolger has returned to take his place in goals again in place of Matthew Byron who has started the last two.

The full-back line of James Kelly, Trevor Collins and Alex Mohan have all seen more game time than any of the rest of the panel – and along with Sean Moore are the only four to have played more than a combined 200 minutes across the four games.

But despite the early season status, Sheehan’s stamp on the team is visible already. Collins is now at full-back and starts his fifth game on the trot (the only player to do so), while John O’Loughlin is being recast at centre-back, where he started out on the county scene at underage level all those years ago.

Kieran Lillis and James Finn (back in the county colours this year for the first time in five seasons) start a fourth game in midfield together while Paddy O’Sullivan, so impressive in defence for Portarlington and an established back in recent seasons at county level, is now in the hard-working half-forward role.

The first-choice full-forward line, going on the games to date, appears to be what it is today too: Sean Moore, Evan O’Carroll and Mark Barry.

And as well as an emphasis on kick passing, there is an obvious aggression and intensity about Laois that was missing last year.

Dublin, though, will be a step up on what was a relatively inexperienced Kildare team and a Meath side in their first game of the year playing away from home on Wednesday night.

While Dessie Farrell has used 39 players in their three games to date – wins over Longford, Louth and Offaly – Dublin haven’t been fielding teams as callow as what they usually do at this time of year.

The only established names not yet to feature are Evan Comerford, Mick Fitzsimons, Jonny Cooper, Dean Rock and Con O’Callaghan but Brian Fenton, Brian Howard, James McCarthy, Ciaran Kilkenny and Cormac Costello, among others, have been involved.

Among their new players to keep an eye on are recent U-20s like Lee Gannon and Ciaran Archer while Peadar O Cofaigh Byrne is a highly-rated midfielder who has been on the fringes of the starting team in recent years.

After today’s game, Laois are in action again next Sunday against Louth in Division 3 of the National League while Dublin play Armagh on Saturday in Division 1.

Neither side will remember this year for today’s game – but a first O’Byrne Cup title for Laois since 2005 would be a lovely way to head into the start of the league.

The Laois team in full is: