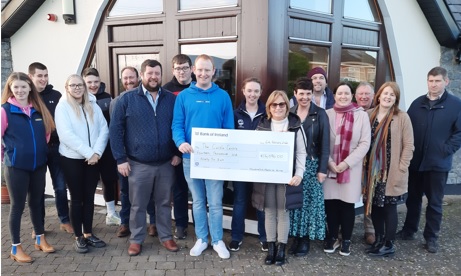 Members of the organising committee involved in Mountmellick Macra’s Light Up Truck and Tractor Run, which was held in late December, recently presented their partner charity, the Cuisle Centre, with a cheque for €14,096 from the proceeds of the event.

Prior to the cheque presentation, members were given a tour of the facility.

Attending the presentation were Board Members from the Cuisle Centre and a number of the organising committee.

The Cuisle Centre acknowledged the substantial donation and informed the committee that the funds would be used for patient care and therapies.

The Light Up Truck & Tractor Run was the first event of its kind to be held in Mountmellick and organised by the club.

The committee were delighted with the huge turnout of supporters, not only in Mountmellick, but in the various towns and villages that the parade of vehicles passed through.

Special word of thanks to the generosity of participants and to all those who made donations.

The Committee is delighted to be able to make such a large donation to this very worthy cause.