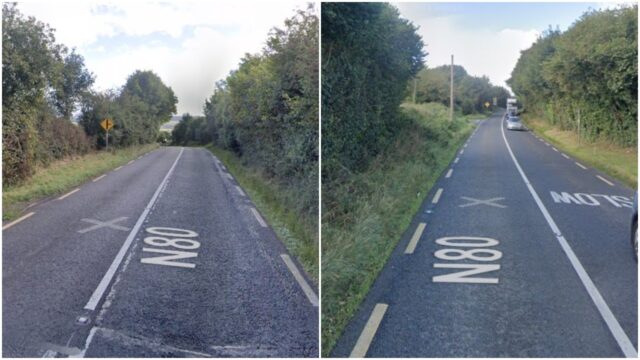 Laois County Councillors have called for urgent safety measures to be put in place after three accidents took place on the same stretch of road since the start of the year.

The piece of road in question is on the Stradbally side of the N80 between there and Portlaoise – just after the Rock of Dunamase.

The part of the road where the accidents have occurred is just after the big dip as you come down from the height of the historic monument.

There have been fatalities in the past along here and residents are fearful that this may happen again if something isn’t done.

The issue was brought to the attention of the meeting of the Graiguecullen-Portarlington Municipal District yesterday by Fianna Fail’s Paschal McEvoy.

Cllr McEvoy said: “The road here is narrow and bendy and there have been three accidents there in the last month.

“Thankfully, none of these were fatal but the fear is that we could see a fatality there.

“The residents are up in arms over this and they are calling for immediate safety measures to slow vehicles down.

“The danger is when you are coming over the hill because you can’t see what is in front of you until it is too late.

“If you come over it fast and there are cars stopped waiting to turn right, that is where the problem starts.

“We need speed signs or something because this is a tragedy that is waiting to happen.

“I know the TII bought land there 20 years ago because they recognised at that stage that there was a safety issue there.

“However, they have done nothing with this land to widen the road or anything like that.

“So I am requesting that the speedometer be placed at the top of the hill to alert people to their speed and perhaps that might help slow vehicles down.

“I am also asking that someone from the Council will go out and meet the residents to see what else can be done.”

Council Engineer Philip McVeigh said he would arrange for the speed reducing sign to be erected.

He also agreed that he would meet with the residents to see what other safety measures could be put in place.