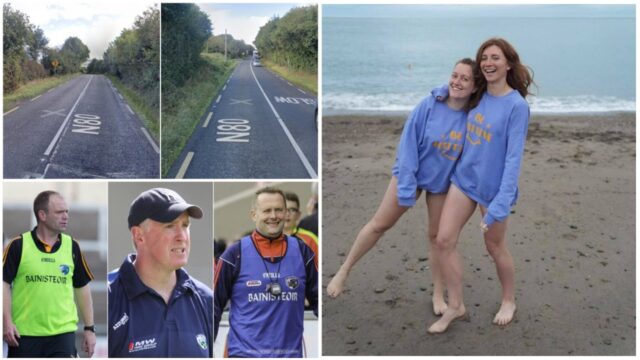 A teenager was arrested following a frightening incident that occurred in Portlaoise in the early hours of Sunday evening.

Just before 6pm on Bull Lane, a man aged in his 20s was walking when he was set upon by a group of five individuals.

It is understood that the group were attempting to rob a backpack that he was carrying and in the course of the scuffle, the man was slashed in the face with a knife.

2 – Sadness at death of young Laois woman after long illness

The death has occurred of young Laois woman Roxy Phelan at her home in Abbeyleix after a long battle with cancer.

Originally from Rathdowney, she was diagnosed with cancer in 2017.

She is survived by her loving husband and soulmate Jason and young sons Cathal and Setanta.

Gardai in Laois are appealing for information following two burglaries which occurred in the county recently.

They are appealing for information on any suspicious cars or persons in the area particularly between the hours of 8pm and 9.30pm

A number of well-known Laois hurling managers have been appointed to roles with clubs outside the county.

Former Laois manager Niall Rigney has been appointed as manager of Castlecomer club Erins Own in Kilkenny while Fintan Deegan, who guided The Harps to the delayed 2020 Laois premier intermediate title last year, has taken over intermediate side St Lachtain’s of Freshford.

Ballinakill’s Seamus Dwyer will also be over James Stephens in Kilkenny once again. They were beaten by Ballyhale Shamrocks in last year’s semi-final.

Laois County Councillors have called for urgent safety measures to be put in place after three accidents took place on the same stretch of road since the start of the year.

The piece of road in question is on the Stradbally side of the N80 between there and Portlaoise – just after the Rock of Dunamase.

The part of the road where the accidents have occurred is just after the big dip as you come down from the height of the historic monument.

A Portarlington woman and her trusty Dublin side-kick have formed a thriving community that promotes positive mental health.

Partners in Positivity is a Podcast that is run by Portarlington’s Sarah Hearty and Dubliner Aisling Burnett.

The duo have released 64 episodes to date and they deal with a range of different mental health subjects and feature various different speakers.

Thrilled, delighted and surprised was how 14 year old Laois schoolgirl, Ruth Talbot described the sale of her Friesian heifer – the 500th Hooves for Hospice animal – for €2,500 at Birr Mart, this week.

The animal was sold by the auctioneer for €2,000 and then the buyer very generously added €500 to the sale price to bring the total value of the donation to €2,500 towards Hooves4Hospice

Just two years ago, Ruth used some of her Confirmation gift money to purchase the animal and rear it for Hooves4Hospice, at the family farm of Robin and Ann Talbot at Coole, Ballacolla.

The Laois U-20 footballers have named their captain and vice-captain ahead of the 2022 season.

Emo’s Sean Greene will skipper the side this year and he will be assisted by Portarlington’s Rioghan Murphy.

Both players were on the panel last year and started in the defeat to Wicklow last July.

Portlaoise Panthers and Portlaoise Parish, who own St Mary’s Hall, are at loggerheads over the future of the facility.

In a lengthy statement, the executive committee of the basketball club outlined a number of grievances that they have over St Mary’s Hall.

A young Laois man captained a Kilkenny secondary school to championship glory in the Leinster ‘B’ final at the weekend.

Colaiste Mhuire Johnstown got the better of St Brendan’s Birr in a thrilling final in Rathdowney last weekend.