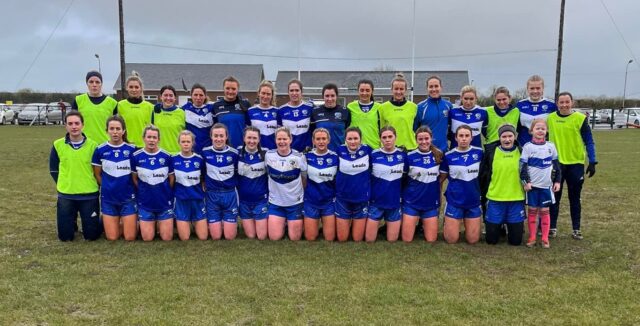 We had two venue changes, gale force winds, hailstones and driving rain – but the Laois Ladies prevailed through it all to reach the Division 2 semi finals with a game to spare.

But just like they did last week against Clare, Laois came from behind to claim their second successive league win.

Laois face Kerry in their final group game but both teams are likely to be guaranteed of their semi final places by that stage.

The elements played a huge part in proceedings and Laois played against them in the first half.

Tipperary’s intent was clear from the start when Caitlin Kennedy burst through on goal but her low shot just flew wide.

Laois held them out for six minutes and it was only the elements that led to Tipperary’s first score as Sarah English’s long range shot went like an arrow into the corner of the net.

Laois opened their account through Erone Fitzpatrick but a second Tipperary goal came in the tenth minute via Caitlin Kennedy.

The same played then landed a point but Laois got a crucial score before the water break as Laura Marie Maher set up Emma Lawlor who did brilliantly to score a goal.

That left it 2-2 to 1-1 at the water break and Laois actually outscored Tipperary in the second quarter.

Shifra Havill and Mo Nerney converted difficult chances with Anna Rose Kennedy leaving Tipperary 2-3 to 1-3 ahead at half time.

Laois turned with the wind for the second half and drew level by the 37th minute thanks to Mo Nerney and Shifra Havill.

They then took the lead for the first time a minute later when Emma Lawlor laid the ball off to Nerney who converted.

Tipperary responded but another Nerney free left Laois 1-8 to 2-4 ahead at the second water break.

Conditions really deteriorated after that but Tipperary squared the game through an Emma Morrisey free.

The game was really in the melting pot but four minutes from time, the important score arrived when Mo Nerney scored Laois’s second goal.

Tipperary kept going and another Morrissey point had the gap back to two as we entered injury time.

But Laois stood firm and collected their second successive win of the season.