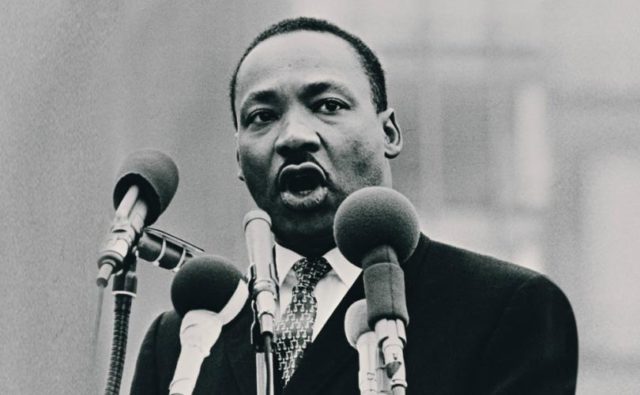 In 1960, Martin Luther King was imprisoned after leading a civil rights march. His dream seemed a long way off.

Criticised by white church leaders, he responded with his famous “Letter from an Alabama Jail”, which included this section:

‘We have waited for more than 340 years for our constitutional and God given rights. The nations of Asia and Africa are moving with jet like speed toward gaining political independence, but we still creep at horse and buggy pace toward gaining a cup of coffee at a lunch counter.

‘Perhaps it is easy for those who have never felt the stinging darts of segregation to say, “Wait.”

‘When you see the vast majority of your twenty million Negro brothers smothering in an airtight cage of poverty in the midst of an affluent society;

‘When you suddenly find your tongue twisted and your speech stammering as you seek to explain to your six year old daughter why she can’t go to the public amusement park that has just been advertised on television, and see tears welling up in her eyes when she is told that Funtown is closed to coloured children, and see ominous clouds of inferiority beginning to form in her little mental sky, and see her beginning to distort her personality by developing an unconscious bitterness toward white people;

‘When you have to concoct an answer for a five year old son who is asking: “Daddy, why do white people treat coloured people so mean?”; when you take a cross county drive and find it necessary to sleep night after night in the uncomfortable corners of your automobile because no motel will accept you; when you are humiliated day in and day out by nagging signs reading “white” and “coloured”;

‘When your first name becomes “nigger,” your middle name becomes “boy” (however old you are) and your last name becomes “John,” and your wife and mother are never given the respected title “Mrs.”; when you are harried by day and haunted by night by the fact that you are a Negro, living constantly at tiptoe stance, never quite knowing what to expect next, and are plagued with inner fears and outer resentments; when you are forever fighting a degenerating sense of “nobodiness”–then you will understand why we find it difficult to wait.

‘There comes a time when the cup of endurance runs over, and men are no longer willing to be plunged into the abyss of despair.’

Faced with injustices like these, it would be understandable if King had become stuck in “the abyss of despair”.

His letter oozes a compassion for the suffering of his fellow African-Americans and a smouldering anger at the injustices heaped upon them. But his movement aroused violent opposition.

Even the white church, which he had hoped would side with his cause, opposed what he was doing. At times the challenge must have seemed too big, the forces of oppression too powerful, and the future fated to be an endless rerun of the past.

But to his compassion and anger King added hope. He was convinced that his dream was in fact God’s dream; that God too had.

Do not look forward to what may happen tomorrow; the same everlasting Father who cares for you today will take care of you tomorrow and every day. Either He will shield you from suffering or He will give you unfailing strength to bear it. Be at peace, then. Put aside all anxious thoughts and imaginations, and say continually: “The Lord is my strength and my shield. My heart has trusted in Him and I am helped. He is not only with me but in me, and I in Him.”

SEE ALSO – Fr Paddy: Make the most of Lent