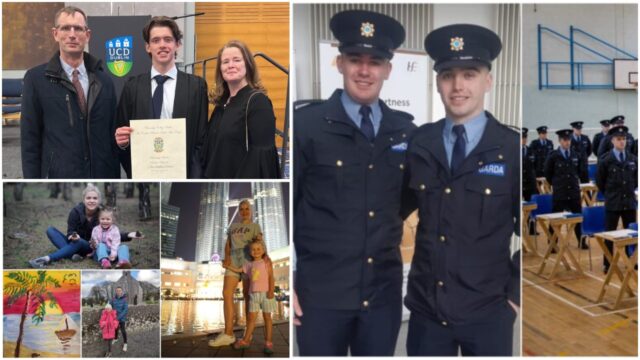 Three young Laois men were among the 70 new recruits sworn in as members of An Garda Síochána in Templemore.

Alan Kinsella from Courtwood, Ronan McEvoy from Portlaoise and Killian Stynes from Abbeyleix were sworn in at the passing out ceremony in Templemore.

All three began their training in July 2021 during the Covid-19 pandemic and have undertaken a blend of on-line learning, on-site learning in the Garda College, and experiential learning in training Garda stations.

A Laois student has received a prestigious university award for academic excellence at a recent awards ceremony.

The University Scholarship Award was for the highest GPA attained in Stage 3 Medicine.

Jack Deegan, who is from Kellyville and plays football with St Joseph’s, kicked a penalty from almost 40 metres with what was the last action of the game to send Roscrea through to the last four.

We look at homes for sale in Portarlington, Portlaoise, Stradbally, Abbeyleix and Shanahoe.

The Heritage in Killenard was buzzing on as Portarlington GAA club members, supporters and players gathered to celebrate their excellent 2020 and 2021 seasons.

And because of Covid disrupting the 2020 season, their two final successes were achieved in a little over three months.

A Ukrainian mother and daughter are adjusting to life 3,000km away from their home after managing to escape the war following the Russian invasion.

Iryna Britanova-Listratenko and her 7-year-old daughter Sasha are now staying with a family near Abbeyleix after the most unimaginable three weeks.

Ennistymon of Clare were their opponents in Duggan Park in Ballinaslow as the Laois school ended a whirlwind campaign in the best way possible.

They only won the South Leinster final last month and went on to clinch Leinster glory before finishing top of the tree.

A Laois hurler has been named on the 2022 Fitzgibbon Cup Team of the Year which was announced last week.

Podge Delaney, Laois joint-captain, is named in the side at corner back in a team that is the cream of the college sport.

The Harps’ defender played at full back for IT Carlow as they reached the semi final and is named at corner back here.

9 – In Pictures: Stradbally parade returns in style as huge turnout in the Little Town

The Stradbally St Patrick’s Day parade returned in all its glory as a huge crowd turned out – to both take part and watch on.

There were representatives from a number of local groups and schools.

This is welcome news for the school especially for the students who will benefit from these.

Having these two extra classes allows children of all capabilities attend school with additional teaching and special needs assistants as well as the necessary facilities required.