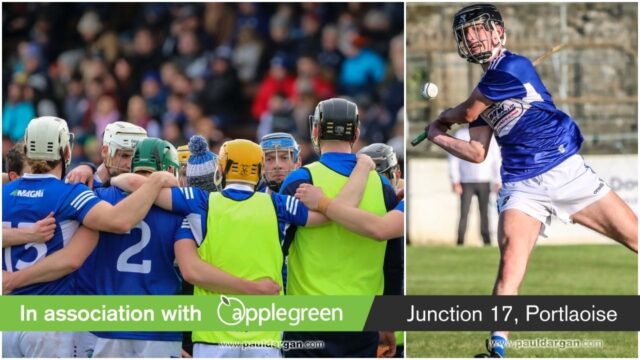 Laois are through to a Leinster Minor hurling quarter-final after an incredible comeback win over Westmeath in TEG Cusack Park this afternoon.

Laois trailed by eight points midway through the first-half, but only trailed by one point at the break. Two goals from Ben Deegan were crucial for the O’Moore side.

Laois started the game on the front foot with Conn O’Hara making a superb point blank save after 20 seconds.

Westmeath would make the most of Laois’ poor scoring attempts as they rattled off the first six scores courtesy of four from Peter Murphy as well as points from Jack Duncan and Craig Neville.

Jack Breen got Laois’ first score as he split the posts when a goal looked the more likely outcome. Westmeath fired over three more scores with Conor Sheridan and Sean Jackson pointing from play while Murphy tapped over another free.

Laois trailed by 0-9 to 0-1 after 20 minutes as it looked like it could be the end of their Leinster campaign. The lads regrouped well and finished the half strong.

Jer Quinlan raised a white flag moments before he had a big goal chance that just trickled wide. Deegan tapped over two frees for Laois before the game’s big turning point.

Deegan was fouled in the square and the young man from Camross stepped up to blast the penalty into the net.

Quinlan got his second of the game before the break as Laois remarkably only went in down by a single point.

Laois started the second-half just like they had the first as Liam Kirby and Deegan pointed from play. Murphy (free) and Duncan pushed Westmeath ahead again.

Kirby split the posts for the second time while midfielder Aaron Carroll got his first of the contest. Murphy was immaculate on the frees for Westmeath as he fired over another two.

Laois’ second goal was simply beautiful, a puck out from Brochan O’Reilly found the hand of Quinlan, who in turn laid it off for Deegan to rifle it into the top of the net. Laois were ahead for the first time and had their tails up.

Jack Breen, Quinlan and a free from Deegan looked to have pulled Laois clear. Murphy and substitute Joe Mulvaney fired back for the home side.

The game was in the balance coming into the final moments as Laois led by three points. Westmeath would make the Laois’ lead a slender one as Darragh Smith and a Murphy free left one between the sides.

Laois finished the game well with three unanswered points. Quinlan, a free from Deegan and a point from Eoghan Cuddy was enough to see Laois secure a four-point victory.

Laois were definitely made to work for their victory and having been eight points down early on, the young lads showed courage to get themselves back into the game.

Laois now face a home quarter- final against either Wexford or Offaly next Saturday in O’Moore Park.