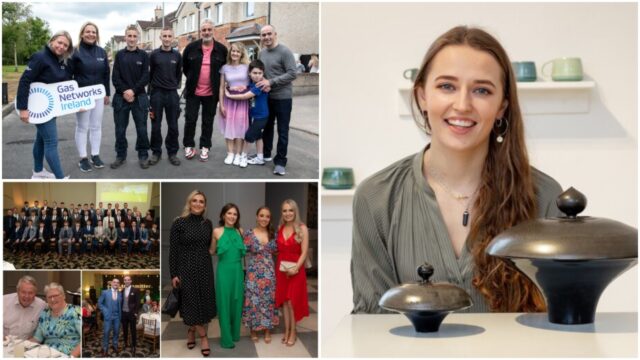 There was serious style in the Midlands Park Hotel on Easter Sunday as Park-Ratheniska held their dinner dance.

2021 is a year that will go down as one of the best ever for all involved in the club.

Laois twins were to the fore as popular RTE TV show DIY SOS came to the rescue of a Meath family last weekend.

The show, presented by Baz Ashmawy, was in Longwood in Meath where scores of volunteers came forward to help the Parsons.

The Parsons are an amazing young family whose house was just not suitable for their needs.

It was the list that almost crashed the LaoisToday site.

Back in the summer of 2017, someone in the office came up with the bright idea of picking Laois’s hottest men. It was a mammoth task, one so big that we asked for your help. We put the shout out looking for nominations – and boy (excuse the pun) did they flood in.

On the back of those nominations and with some local knowledge that our judging panel possessed we put the list together and what a fine-looking group it was. There were probably some notable absentees and some may be peeved at their actual ranking.

A very talented Laois woman was recognised for her abilities recently at the RDS Craft Awards 2022.

Laois ceramicist, Laura Matikaite is one the five winners who received a €10,000 cash prize to support the development of their craft & business skills.

She also receives a much sought after free stand at the annual GIFTED – The Contemporary Craft & Design Fair which runs at the RDS each December.

Laois County Council have signalled their intention to construct 54 new homes in Portlaoise.

The idea to regenrate Hepburn Court was first mooted back in 2018.

Laois are through to the quarter finals of the Leinster minor football championship following a comprehensive win over Louth.

Conor Gorman’s charges won by 19 points to finish second in the group behind Dublin and will now await the winners of the preliminary quarter finals.

For the second successive year, the Laois U-20 hurlers have fallen agonisingly short in their quest to beat an established county.

Last year it was Kilkenny at this stage and this week it was Wexford – with just a point between them at full time on this occasion.

Ollie Hally’s side led at half time but Wexford scored six of the first seven points of the second half to open up a gap that Laois couldn’t overcome.

A driver failed a roadside intoxicant test at the scene of a multiple car crash on the N80 between Portlaoise and Mountmellick on Wednesday evening.

Road closures were in place for a while as emergency services dealt with the incident following a three-car pileup.

A battling Laois comeback just fell short as Dublin held on to defeat them in Parnell Park last weekend.

Dublin looked set for a comfortable victory when sub Alex Considine rattled the net with 61 minutes on the clock and then soon went seven ahead.

Whoever won this encounter was guaranteed a quarter final place in the competition.