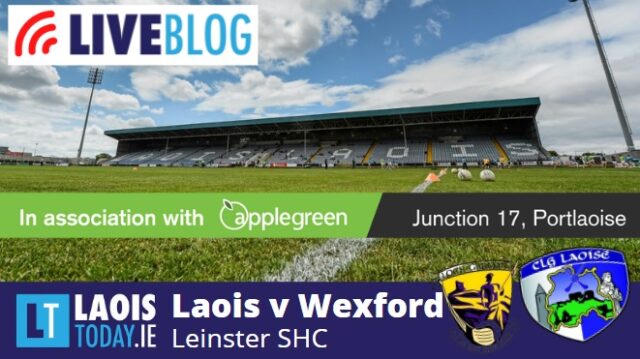 For the third week running, the Laois hurlers are in Leinster championship action this afternoon.

They take on Wexford in O’Moore Park in the third game of the round robin format needing a win to keep their slim qualification hopes alive.

Laois haven’t beaten Wexford in the championship since 1985 and have lost all ten meetings since. Last year in the opening round, Wexford were 5-31 to 1-23 winners, so it’s no surprise that Laois come in as massive 9/1 outsiders. Wexford are 1/16.

Darragh Egan’s side come to O’Moore Park in bad need of a win – and a big one at that. They have only one point after two games having drawn with Galway and lost to Dublin.

They’ll be looking for two wins in their next two games against Laois and Westmeath before meeting Kilkenny in their final outing in Nowlan Park.

Laois manager Cheddar Plunkett has made two changes to his side that lost to Kilkenny last week with Ciaran Byrne from Abbeyleix handed his first championship start and Ben Conroy back from injury to also start. Both are named in attack with Jordan Walshe and Aidan Corby dropping out.

Wexford, meanwhile, have made four changes to the side that lost by a point to Dublin last week.

Today’s game throws in at 2.30pm and you can follow all of the action on our Live Blog below.