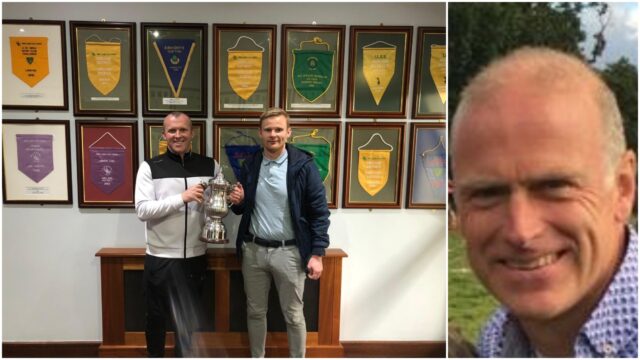 Plans are in place to revive the Portlaoise CBS Past Pupils Golf Society and rename it in memory of a beloved late teacher.

In 2004 he guided Portlaoise CBS to the All Ireland Colleges ‘B’ football final which they narrowly lost to St Louis of Kilkeel from Down.

John was also involved with the Portlaoise senior hurlers in recent years, working alongside Teddy Fennelly when the club reached the Leinster intermediate final in 2018.

As well as that he was a keen golfer and in 2017 helped a team of Portlaoise CBS and Portlaoise College staff to win the inaugural All Ireland Teachers Golf Championship.

Former CBS students Kevin Sheehan and Mark Keenan are the driving force behind the re-establishment of the golf society.

The lads decided to get it back going again as a lot more people are playing golf at present and they believe that it would be a great way to catch up with old friends.

Kevin said: “We decided to rename it ‘The John Duggan Memorial Cup’ after Past Pupil and teacher John Duggan who passed away.

“I remember when I was in the CBS my father Frank gave me the cup to give to John in school as he was heavily involved in the organisation of it.

“Mark spoke with John’s family firstly and we were delighted to have the Cup named after such a popular and well respected man who loved his golf and is sadly missed by all.”

The first outing will take place Friday May 20 in The Heath Golf Club where over 60 players have put their names on the timesheet so far.

Many local businesses and individuals have kindly offered to sponsor prizes which is greatly appreciated.

Anyone interested in playing can WhatsApp Kevin on 086-1649066. Past pupils, teachers, guests and visitors are all welcome.