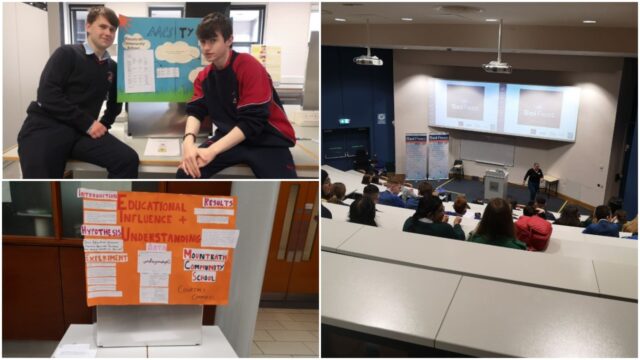 For the first time in two years, the SciFest National Awards were held in person recently in Dublin City University.

Nine Transition Year students at Mountrath Community School displayed six projects at this Exhibition; with topics ranging from the ‘Speed of Sliotars’ to the ‘Most Dangerous Time of the Day to Travel on the Road’.

The Students had a fantastic day travelling to Dublin with their teacher Mr John Joe Ryan.

Courtney Chamber’s project, an intervention study, entitled “A Statistical Analysis on the Influence of Anti-Racist Education on Transition Year Students” aimed to investigate the influence of classroom based educational interventions on Students in the Middle Adolescent Age group.

Courtney was inspired by her past work with both the ESRI and the ISSU on Senior Cycle reform, Equality within Education and the State Exams Crisis.

Courtney would like to extend her gratitude to her mentor Dr Sarah Foley (applied psychology UCC) and to her teachers for all their help on the project.

Luke Carroll’s project’s objective was to investigate the views of different Irish youths on flags and symbols.

Luke chose this topic because he often watched the news and saw different groups of people treating symbols very differently from each other.

Well done to all students involved and their mentors.