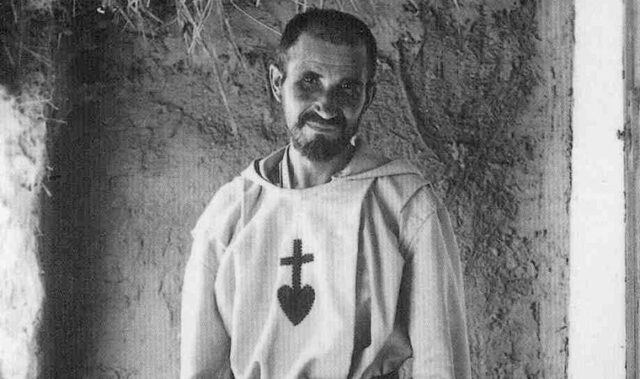 The following is a biography of the wonderful life, of an inspirational Christian, recently canonised by Pope Francis.

For all of us it is good to remember, “Every Saint has a past and every sinner has a future”.

Charles de Foucauld was born in 1858 into an aristocratic Strasbourg family yet sadly orphaned by the age of six and was cared for by his maternal grandfather who was a colonel in the army. I

t is hardly surprising therefore that Charles was encouraged to follow a military career and in 1876 he entered Saint-Cyr Military Academy.

However he was dismissed before the end of the year on the grounds of laziness and ill-discipline.

By the time he was 20 years of age his grandfather died making Charles heir to a considerable fortune much of which he managed to squander. So something of the prodigal comes through at this point.

At 21 years of age he graduated from the Saumur Calvary School, though perhaps with little distinction, he qualified 87th out of a class of 87!

Well someone has to! His military career was brief and chequered though he did distinguish himself as an officer during some dangerous action in Tunisia.

It is conjecture but his formative years and early adulthood I imagine to have been shaped by emotional wounds provoked by the early death of his parents.

Then comes another formative period of journeying and seeking, much of which takes place in Nazareth and the Holy Land but with particular fascination also for North Africa.

Here, brother Charles learns to speak Arabic and Hebrew and undertakes a dangerous expedition travelling through Morocco disguised as a Jewish Rabbi.

Though he was not practicing a faith of any sort, these explorations among the local tribal communities had a profound effect upon him – when he returned to France he began to live a more sober and austere life and found himself articulating these words: “God, if you exist, make yourself known to me”.

His eventual return to the Christian faith in his early thirties resulted in a visit to the Holy Land and Nazareth where he felt compelled to live what he called the “the hidden life of the poor and humble worker of Nazareth”, a lifestyle that became characteristic of his emerging spirituality.

Nazareth being interpreted as: “living anywhere in littleness and poverty and in communion with Jesus” (Ashwin).

He took up holy orders as a Trappist monk and served for a time in Syria but this didn’t fulfil his desire.

His desire was to “go to Nazareth alone, and live there unknown as a labourer doing everyday work: solitude, prayer, adoration, meditation of the Gospel, humble work”.

And so he became a house worker for the Poor Clare Sisters where he lived in a hut near their cloister for three years.

In 1901 brother Charles was ordained priest. His intention, to return to Algeria to found a monastic fraternity called the “Little Brothers of the Sacred Heart of Jesus”.

His aim was “to live out in the Sahara, the hidden life of Jesus at Nazareth, not in order to preach but to live in solitude, the poverty and the humble work of Jesus”.

Yet there were times when he was not content to be silent – in particular he drew attention to the pernicious evils of slavery where he encountered it.

He committed himself to working with the Tauregs in the Sahara learning their language in order to translate the gospel but also to learn more about their culture through their song and poetry.

His hope was to establish this Fraternity, or Union of brothers and sisters of the Sacred Heart, this being an assembly of what he called “Fervent Christians from all walks of life … able to make known through their example, what the Christian religion is, and to “demonstrate” the Gospel in their lives” (Rules and Counsels, 1910-1913).

Of himself he claims, “My apostolate must be the apostolate of goodness. In seeing me, people should be able to say to one another, “Since this man is so good, his religion must be good.”

The final part of Foucauld’s story is bound up with the outbreak of the 1st World War, which contributed to destabilising the area as raids by Senoussites from Libya became more frequent.

It was one such raid that led to him being fatally shot on the 1st December 1916, his body was buried in a ditch outside Tamanrasset where he had spent these closing years of his ministry.

Saint Charles de Foucauld’s Prayer of Abandonment:
Father, I abandon myself into your hands; do with me what you will.

Whatever you may do, I thank you: I am ready for all, I accept all. Let only your will be done in me, and in all your creatures. I wish no more than this, O Lord.