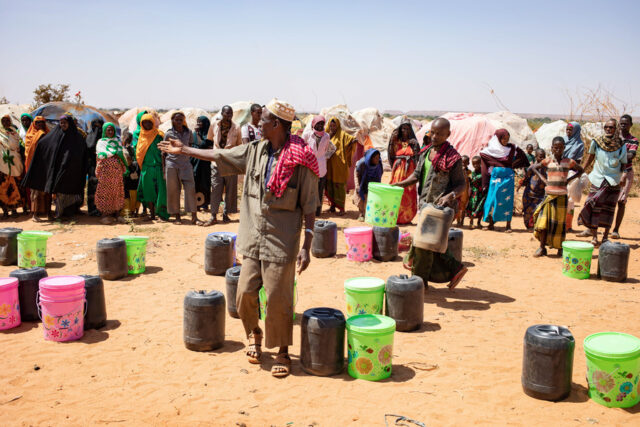 Hunger is a problem that has plagued humanity for millennia, and it continues to haunt us.

There are at least 350,000 children under five years of age in Somalia dying in the most brutal circumstances. They are slowly dying, from lack of food, from starvation.

The United Nations is warning that 6.7 million people will need food aid in Somalia in the coming months – about 40% of the population.

The reasons for such a crisis are many, with climate change and conflict the main driver. The impact of war in Ukraine on food supply and prices is also a factor.

It is deeper, longer, and more severe than previous drought episodes and, frighteningly, a fifth and even sixth consecutive drought is now being predicated.

Trocaire together with other humanitarian agencies have been sounding the alert on this crisis since 2021. The response from major donors has been too slow, and too late for many.

The international aid community working on the ground in Somalia fear that even if famine isn’t formally declared, the current hunger crisis will claim more lives than the 260,000 who perished during the famine in 2011.

We simply cannot wait for famine to be declared to act as it will be too late to save precious lives. More than one million people have already been forced to leave their parched lands and dead livestock in search of life saving assistance, their way of life lost and their dignity taken away.

Children, already weakened by months of hunger, are dying on the tortuous journeys from their homes to internally displaced camps that have sprung up on the margins of urban centres.

They are buried by their parents in shallow graves on the side of dusty roads.

In 2011, before famine was officially declared in Somalia, over 100,000 people had already died of starvation.

Another 150,000 died in the weeks and months following the famine declaration. After that famine, the global community said ‘Never Again’, with governments and the UN promising the resources needed to mount a response. But we have failed.

We have ignored any lessons from the past and allowed people to suffer. We in the Global North cannot excuse ourselves. The suffering caused by climate change in Somalia is in large part due to our lifestyles and our extractive relationship with this planet.

The reality is that it is countries like Somalia that have contributed least to climate change who are impacted most.

They like many humanitarian agencies have seen demand for our services treble in recent months. Such are doing what they can with resources available, but more needs to be done to save hundreds of thousands of lives.

There is a critical need to invest in resilience, livelihoods, infrastructure development (such as health systems), climate adaptation and durable solutions that could perhaps provide a pathway for averting such crises in the future.

Surely to God we have learned the lessons from the past and can, together with local organisations, do better.

It is heartening to hear that the Irish Government has pledged a further €30 million to the crisis in East Africa.

It is a step in the right direction and an example to other nations to step up their response, too. However, Ireland’s commitment of 0.7% of GNI to Overseas Development Assistance still remains a dream. It is currently at 0.32%.

This is an apocalypse that the Irish faced one hundred and fifty years ago during the Great Famine. The Irish public are imbued with a deep sense of compassion.

They have, over many decades, responded to such horrors with compassion and solidarity. We need to do more, not to give too little, too late.

Almighty God, it is difficult to see children suffer, especially from hunger. We pray for You to give the hungry daily bread today (Matthew 6:11) and end their persistent hunger. Provide the food they need to grow and thrive. Pour out Your grace on hungry families, especially parents straining to feed their children despite dwindling resources.

SEE ALSO – ‘If people had been lost due to war, there would be a memorial’ – Disappointment as no Covid-19 reflection area created