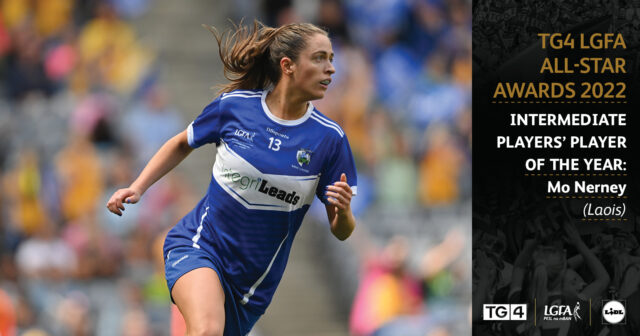 The 2022 TG4 Intermediate Players’ Player of the Year award has gone to Laois forward Mo Nerney.

Mo, who plays for Timahoe Ladies, was top scorer across all three grades of the 2022 TG4 All-Ireland Championships.

She did this with an incredible haul of 5-31, including 1-5 in the TG4 All-Ireland Intermediate Final victory over Wexford.

Mo’s tally of 46 points was good enough to hold off the challenge of Fermanagh sharpshooter Eimear Smyth, who finished with 5-27 (42 points).

Nerney, who was also nominated for an All Star, landed the Intermediate Players’ Player of the Year award ahead of two of her Laois team-mates.

Park-Ratheniska’s Erone Fitzpatrick was nominated for her flying performances in attack while Timahoe’s Aisling Donoher was recognised after she was a rock at the back all year.

All three players from the O’Moore County were named on the 2022 TG4 Intermediate Team of the Championship, which was announced in September.

Nerney was recognised at the annual All Star banquet, in association with Lidl, at The Bonnington Dublin Hotel on Saturday night.