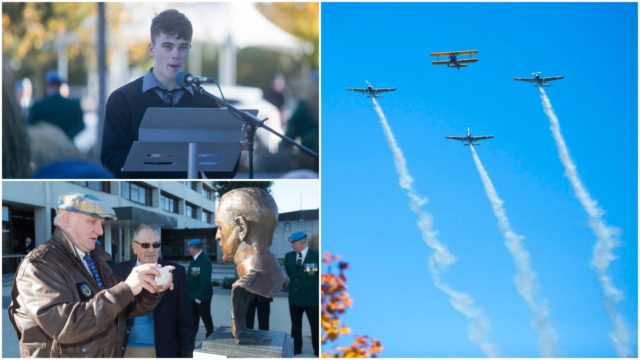 Portlaoise airman Colonel James Fitzmaurice has been commemorated yet again for his legendary east to west crossing of the Atlantic.

The 90th Anniversary of the first-ever east to west Atlantic flight was commemorated with a wreath-laying ceremony at County Hall, Portlaoise.

A rare aircraft fly-past was performed in the skies above County Hall on Saturday October 6, at 11 am.

This was performed by members of the Irish Historic Flight Foundation.

It was led by a Chipmunk tandem, a two-seat, single-engine aircraft, and also three other planes including an Irish Air Corps aircraft.

Minister Charlie Flanagan performed the official opening of the weekend’s events, while a number of wreaths were laid at the foot at the bronze bust of Colonel Fitzmaurice, which was removed from County Hall for the occasion.

Speaking on the occasion, County Council Cathaoirleach John King said that he was delighted to welcome everyone to the event “to reflect on the achievement and sacrifices of the men who flew across the Atlantic from east to west for the first time 90 years ago this year.

“This is the European Year of Cultural Heritage and the theme of the year is Make a Connection.

“We can reflect on how appropriate it is that we celebrate an event and the three men who made a connection forever between Ireland and Germany and also cemented an important connection between Europe and North America.

“The scale of the achievements linking the two great continents for trade and friendship cannot be overstated.

“The first non-stop east to west flight across the Atlantic by Captain Herman Kohl, Colonel James Fitzmaurice, officer commanding the Air Corps and Baron Von Huenfeld in the Junkers W33 aircraft Bremen, which took off from Baldonnel Airport on Thursday 12 April 1928.”

While born in Dublin in 1898, James Micheal Christopher Fitzmaurice and his parents Micheal Fitzmaurice and Mary Agnes O’Riordan moved to Portlaoise where they were house in specifically-built accommodation for prison officers who worked in the adjacent Portlaoise Prison.

He went to school in St.Mary’s CBS. A stainless steel monument was erected in 2001 in his honor.

The monument depicted a wing of an aeroplane that was used on the flight. It was unveiled in Fitzmaurice Place, Portlaoise.

Due to renovations being made to that side of the town, the monument has recently been removed.

Check out Alf Harvey’s pictures below:

SEE ALSO – ‘People have been so amazing,’ Vikki Mulhall on the support received in memory of late husband Alan