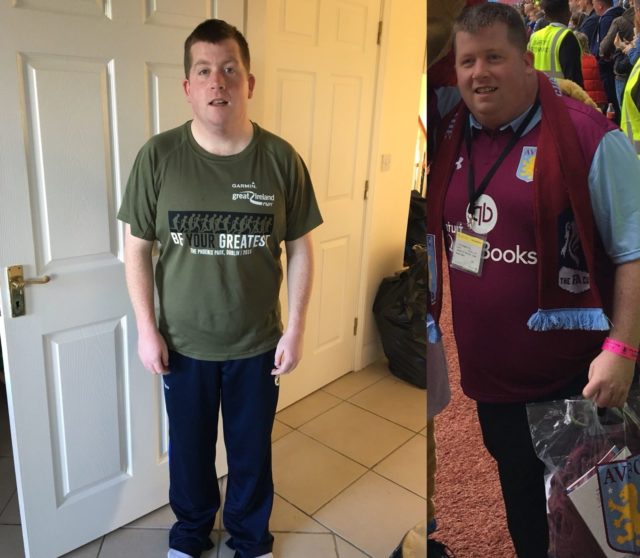 Tomas Moore of Portlaoise met with Alan Hartnett in May to discuss his incredible fitness journey.

A young Laois man has opened up about his incredible weight loss.

Tomas Moore, who is well known as a referee and for his work with Laois GAA, has undergone a remarkable transformation in the last 11 months.

Tipping the scales at more than 20 stone last June, he decided that enough was enough and set about trying to do something about it.

Speaking to LaoisToday, Tomás revealed that a fear of ending up in an early grave drove him to change.

He said: “The number one reason for doing this was my health, number two was the family and number three was getting active.

“I had chest pains, shortage of breath and the usual health problems associated with being so heavy.

“I didn’t want to end up in a coffin in my late 20s so I knew that I had to start doing something.

“I have a small child, I’m getting married in March 2019. Having a small child and having to run after her in years to come or the fear of not being able to play with her in the garden was a big thing.

“I saw pictures of myself. A couple of us went to an Aston Villa match in May of last year and I remember buying a jersey at the time and it was a 4XL.

“I thought it looked well. When you are the way I was, you don’t see what is there because you are in denial. We got a tour of the ground and we got a photo taken out on the pitch – and it was that photo that told me to take action.

“There is another photo of the three of us together – myself, my fiance Danielle and Kiera the baby – and look, it is not a photo you want hanging on the wall at home.

GAA is a big part of Tomas’ life. He has worked in the County Board offices for a number of years and is also a referee.

His desire to get back playing and refereeing was another reason for making a change.

He said: “Another reason was that I wanted to go back playing sport. I had joined Park-Ratheniska, purely because I was living in Portlaoise, and Danielle was chairperson of the Ladies club.

“One of the saddest things from it is that I was eligible to play Junior C football but I wouldn’t go to a Division 5 match because of the fear of having to play.”

Tomas said: “I started doing it on the 21st of June 2017. It was a Wednesday, people always say you should start on a Monday but that didn’t happen so I started on a Wednesday.

“I was 20 and a half stone starting off, maybe even 21 stone. We had a weigh in in the GAA club and I didn’t get up on the scales out of fear and embarrassment.

“I had actually been a member of the Portlaoise Leisure Centre for a number of years but I never used it.

“I went and got assessed by an instructor called Gill. Zoe and Gill have been massive for me.

“Gill said stage 1 was walking and she said they would eventually get me back running but it would take time.

“It is frustrating because you see people flying and you’re at such a low level. Like I would have struggled to get up the stairs at home.”

As well a starting to exercise, Tomas also had to change his eating habits.

“So you have breakfast, 10am, lunch, 4pm, 6pm and 8pm. So you are constantly eating but it is all smaller portions.

“You are not getting up and having a breakfast roll and then maybe having a McDonald’s and then a takeaway. Like I would have previously went training with Ratheniska and then stopped into McDonald’s on the way home – completely defeating the purpose of what I was doing.

“I would have drank no water and would have had six or seven bottles of Lucozade a day. Constant snacking all day and no activity – so that all changed.

“I was a terrible man for takeaways and I would never have a proper dinner.

“So now I drink 3 litres of water a day instead of drinking none. I still have my treat once a month. But I feel guilty afterwards and I head straight to the gym.”

It took six weeks before Tomas started to see changes.

He said: “The weight just gradually fell. I first started to notice changes in the clothes I was wearing. They were triple XL and 4XL from Tesco.

“I used to go to Tesco hoping that nobody would see me buying them because I was ashamed. You couldn’t go into a sport-shop and buy them because they didn’t make them.

“So it gradually went on, I worked hard in the gym and then by the end of August I started to see some results fitness wise.

“September and October I was still in the gym and football had finished so that was tough to keep going because there was no avenue and the dark evenings had come in.

“But then in November I started to do some running. Now that was a five minute run or half a mile. And to me at that stage was like running a marathon. And the weight kept dropping with the results seen in pictures.”

Tomas had battled with his weight before. Back in 2011, as he previously mentioned, he was on top of it and ran the Dublin marathon.

But his first event on this new weight-loss journey was on St Stephen’s Day 2017 in Ballyroan.

He said: “St Stephen’s Day in Ballyroan was a 5km and that was my first time back out there.

“It showed me that I could now do 5km and I wanted to keep it going. The club started back training in January too and then I did the Portlaoise 5km.

“I actually got my best ever 5km in Portlaoise and then two days later I went and did the Graiguecullen 5km where I bet my previous time by 10 seconds.

“And since then it has gone from doing 5km to my training plan being over 7km. Then at the start of April, I completed the Great Ireland Run in Dublin.

“That was my first 10km outdoors since 2011 and it felt good. It felt like if there was another three or four km, I probably would have done it.” 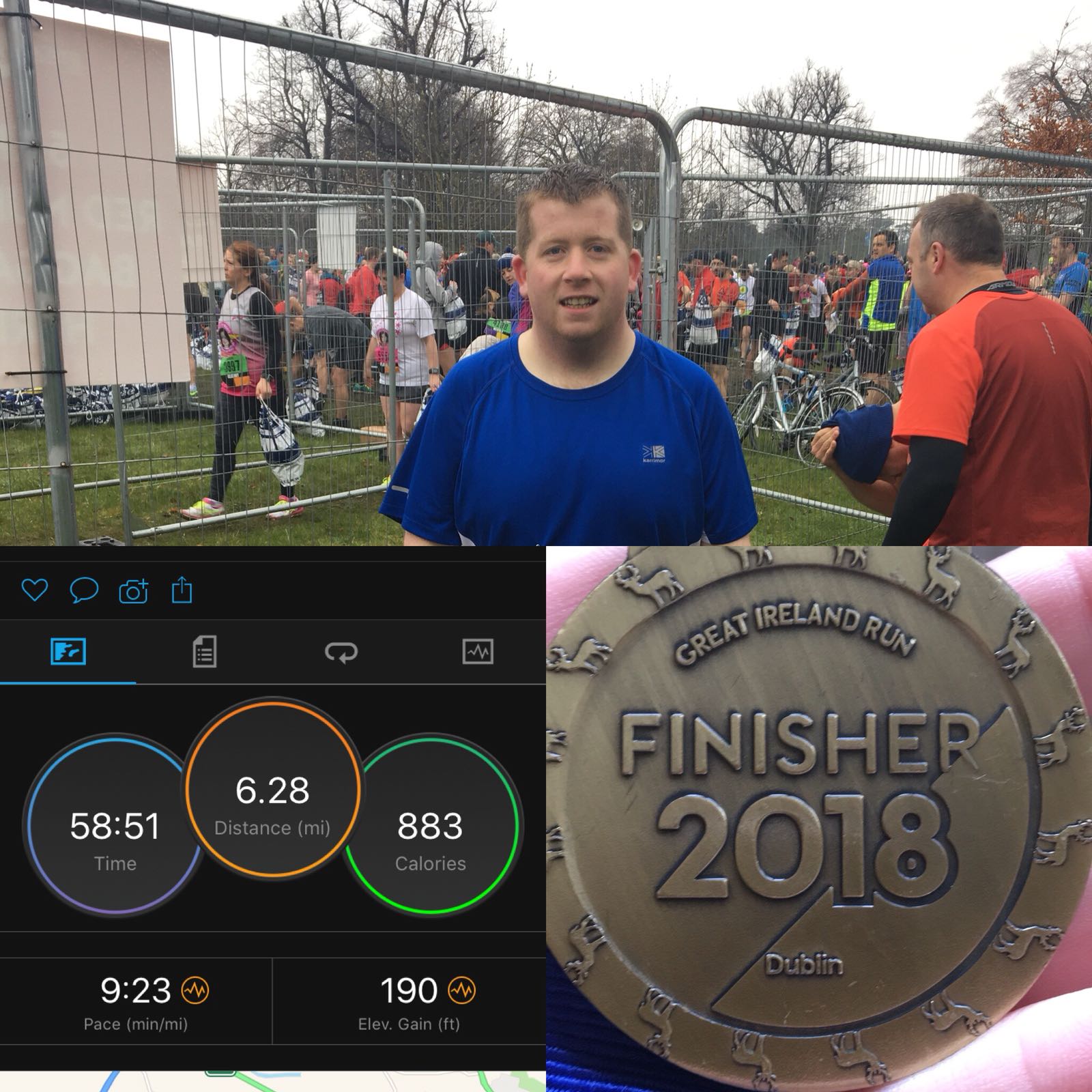 Tomas has now lost five and a half stone since he weighed in back in June of last year. And he has a target of where he would like to get to.

He is also very aware of the pitfalls he fell into after losing a substantial amount of weight seven years ago.

“I am 14 and a half stone now so another half is the aim.

“You take a few weeks off to give the body a break. Then you think ‘oh I’ll have one takeaway’ and then it moves to two.

“Next thing you are at Christmas time because the Dublin marathon is in October which was the last event I did at that time.

“So then you come to January again and you decide you mightn’t play any sport this year. So it just spirals.

“It is a shocking thing to say I was in a rut for seven years but that is what happened. You feel as if there is no way out and you feel as if it is grand.

“But all of a sudden you are gone from 23-years-of-age to 30 and you have achieved nothing.”

Tomas puts a lot of his success down to the support he gets from his family and friends – chiefly his fiancee Danielle.

“Danielle is very supportive and she doesn’t put pressure on me to do it.

“Anyone that knows me always says there is such a difference in me since I met her.

“Obviously, she would like me to do it, there is no doubt about that, and you have to think of Kiera growing up too.

“But doing this has definitely made me feel more confident, active and more able to do things.

“I am back refereeing now. I went back in November because I felt more confident that I could do it.

“I gave it up because I was too heavy and wasn’t fit enough. Obviously any referee’s aim is to referee in O’Moore Park or Croke Park and I don’t know if they will happen but they are the goals.

“So they are the kind of things that are driving me on and I intend to keep going.”

For anyone reading this that finds themselves in a similar position to Tomas, he has some simple advice on what to do.

He said: “The first thing to do is sit back and ask yourself is it worth it? Is it worth not feeling healthy? Is it worth having that takeaway?

“Is it worth not being able to enjoy your child growing up? Think maybe a year down the line and see what it is you would like to do. Set yourself a goal.

“I remember going down to the Portlaoise St Patrick’s Day Parade last year and thinking ‘God, I would love to be able to run in that’.

“So this year I did it. In 2011 when I lost the weight,  I went from no base to doing the Dublin marathon and then hitting the lull after it.

“So the fear for me is that you could set back into that. But I think I am more in control of it now. I can enjoy my treat once a month and then that is it.

“And when the dark evenings come, maybe I’ll take up a different sport or switch programme in the gym..

“Before you know it then the evenings get longer and off you go again.”