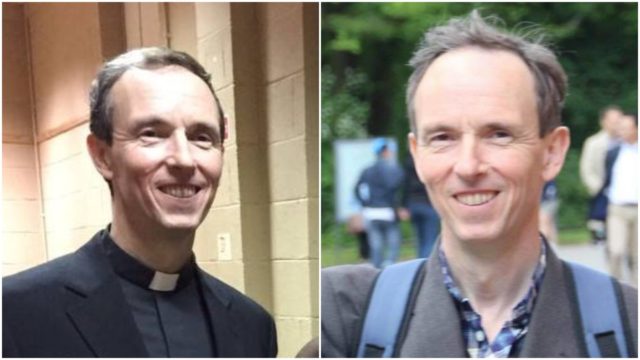 There is widespread shock and sadness as Abbeyleix and Ballyroan Parish Priest Fr John Cummins was killed in a tragic accident yesterday evening.

The Parish Priest, who had only taken the post in 2017, was killed following a tragic accident at his home on the Ballinakill road at around 3.30pm yesterday.

Originally from Newbridge in Co Kildare, Fr Cummins succeeded Fr Gerard Ahern in the role of parish priest in July 2017 and was extremely well-liked in the community.

His father Con owned the famous Con Cummins pub in Newbridge. The well-known pub is still in operation and is now owned by Fr John’s brother, Con jr.

Many people expressed their shock and sadness at the loss of the well-known priest, aged in his fifties.

Bishop of Kildare and Leighlin Denis Nulty has this to say:

“It is with deep regret and sadness I announce the sudden death of Fr John Cummins, PP Abbeyleix after a freak accident with his car at the Parochial House.

Bishop Nulty also mentioned the services Fr John is invovled in throughout the community on the Kildare and Leighlin Diocese Facebook page:

“My thoughts and prayers are with Fr John’s mother, brothers and sister, his priest colleagues in Kildare and Leighlin, his team in Faith Development Services and ACCORD, Carlow and of course his many parishioners in Abbeyleix.

“Also remembering his former colleagues in IT Carlow and parishioners of Carlow Cathedral Parish.

“John is a tremendous loss to all of us in the Diocese. I will hold all of you in my prayers over these very difficult and lonely days.”

“He had a tremendous impact on the community. He was just coming back from the Grandparents Day in the local primary school when the freak incident happened.”

“It was the best experience I had ever had on a pilgrimage. He knew every single building and joined in on social events as well as the pilgrimage.

“He was involved in everything. From St Vincent de Paul to Christmas parties to the school. The community is devastated today,” said Fennelly.

Ballyroan native and fellow Portlaoise municipal district councillor Mary Sweeney spoke at length about the impact Fr Cummins had on the Ballyroan community.

“I would like to pay respect to his family first and foremost. Fr Cummins was a much-loved priest and there was a deep fondness and regard for him in the community.

“He was a very gentle person and very endearing. What I thought was particularly unique regarding Father Cummins is that he had a lovely ritual of waiting to speak to people outside after Mass.

“Soon people began waiting outside just to speak to him. He emanated calmness and sincerity and also had a smile on his face.”

She also spoke about his work as the Chairperson of the Board of Management of Scoil Eoin Phoil Naofa II.

“He was much-loved by children, parents and grandparents – this was particularly evident around the time of First Holy Communion.

“He never failed to thank the parish community – especially the parish choir which he was very impressed with. He was always very pleasant and there is a deep sadness in the community today,” said cllr Sweeney.

Lecturer at IT Carlow and Portlaoise municipal district cllr Pauline Madigan spoke about his popularity at the third-level institute.

“The death of Fr John Cummins is just so sad. Sincere sympathy to his family, friends and community.

“He was Chaplain in IT Carlow in previous years and he was as popular there as he was in Abbeyleix. Ar dheis Dé go raibh a anam dilís.”