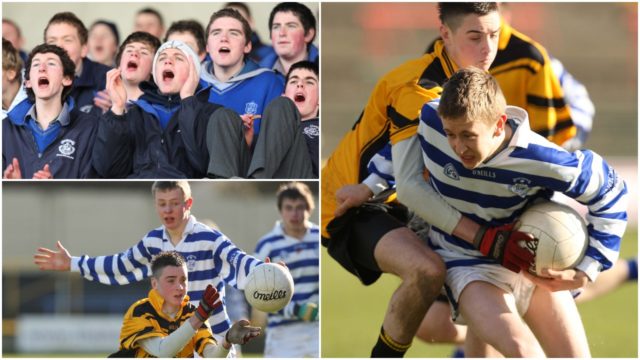 It was a star-studded Knockbeg team that featured future inter-county stars in the form of Damien O’Connor, Paul Kingston and current Laois captain Stephen Attride – who coincidentally would go on to manager a Knockbeg U-16 team to win this very crowd 10 years later.

It also had current Connacht rugby player Tom Daly who operated in midfield.

The eventually victors Newbridge weren’t too bad either and they had current Moorefield and Kildare forward Adam Tyrell in their ranks.

The match was played on a sunny Tuesday evening in O’Moore Park.

The first half was slow starting and it took until eight minutes into the game for the first score to be kicked from a free for Newbridge.

Paul Kingston responded seven minutes later with a free of his own but Newbrige then took control of the game.

Newbridge got their first goal after some good play by wing forward Ronan Murray who gave it to Gareth Malone who slotted past the Knockbeg keeper.

The second goal came shortly after a long free was kicked in and Eoin O’Connor was left on the edge of the square with the simplest of finishes.

Adam Tyrell added more misery to Knockbeg with a point but captain Tom Kavanagh gave them some hope with a good 20 yard score.

Knockbeg went in six points down at the break.

The start of the second half didn’t get much better for Knockbeg as they were outscored 0-3 to 0-1 in the early stages of the half.

Things then started to go Knockbeg’s way as Stephen Attride broke through the middle and finished brilliantly into the bottom corner.

The excellent Damien O’Connor then pointed two frees to cut the deficit to two points.

Ronan Murray then got a superb score to put the gap back to four points.

The game finished 2-7 to 1-6 in favor of Newbridge who put in a very strong first half performance which was massive in the end.

Knockbeg put in a spirited performance but their late comeback came too late.