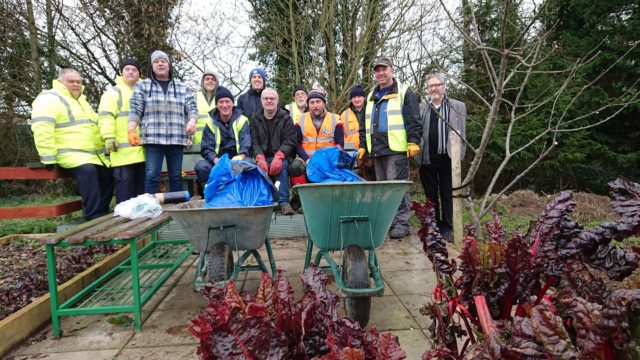 “You can’t beat the meitheal of men working together,” asserts a determined Basil Mannion. Basil is the Community Water Officer for Laois and much of the midlands.

He is witnessing that meitheal spirit first hand at Portlaoise Men’s Shed where the members are rolling up their sleeves and getting stuck in on the latest River Triogue clean-up.

Basil, clearly an optimist, believes that the river can be restored to its former glory thanks to the efforts of the Men’s Shed crew and other like-minded and civic spirited citizens.

The Triogue an important waterway that runs through the heart of the town is struggling to find the fish life of yesteryear and these days must content with another foe, the indiscriminate dumper.

People are latterly pulling up at the roadside bridge on the Timahoe Road and horsing bags of rubbish into the river.

It’s unsightly and sickening but has only served to spur on the Men’s Shed lads to link up with the local authority and Portlaoise Tidy Towns to organise this latest clean-up of the much maligned Triogue.

The Triogue rises in the Cullenagh Hills not far from Ballyroan and runs its course to join Ireland’s the Barrow at Clonterry north east of Mountmellick. It is an important tributary to the country’s second biggest river.

En route the river flows gently through the town of Portlaoise, brething life and biodiversity into the town park at the Downs, tipping on past St Peter and Paul’s Church at Bridge Street, down past the old convent and onwards parallel to the Ridge Road as part of a linear park before it tips on towards Mountmellick.

But it’s where it enters the town on the Timahoe Road is that the Triogue runs firstly past the Men’s Shed base at the Equestrian Centre. It’s here they have their HQ, greenhouse tunnels and riverbank vegetable allotments.

Staring the Men’s Shed in the face each day was an ever increasing pile-up of rubbish bags clogging the river as it flowed towards town. Not ones for hanging around they decided to take action and organised a clean-up in concert with the Council. 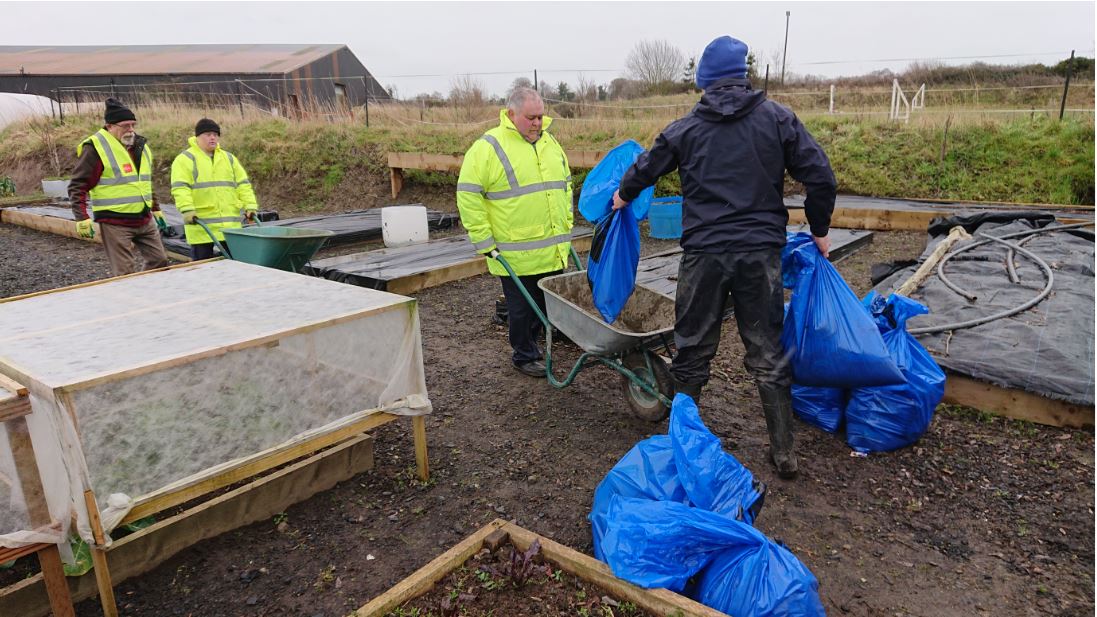 It’s not the first time that locals have come to the rescue of the disrespected Triogue as the Portlaoise Tidy Towns continue to play their part as too did New Road resident, John Styles, whose back garden runs down to the river’s edge near the town park.

What they are confronting is not idle or thoughtless littering but wholesale indiscriminate dumping of domestic waste. It’s nothing short of a disgrace.

In a relatively short space of time the men of the Men’s Shed waded in to the water and fished out over 100 bags of refuse.

John Ging the Council’s Environmental Officer looks on knowingly. He is encountering this kind of thing all the time. He has issued 13 on-the-spot fines in the space of a few weeks this year already. 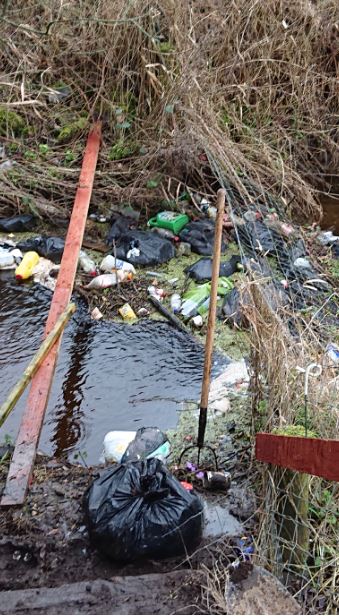 Ever the optimist, Basil Mannion the Water Officer is not defeatist: “The river is a corridor of life through the heart of the town, there are manicured sections and wild sections for habitat, wild flowers and meadow mixed with cut back areas for ease of access, compromise is the way to go and if we all work together this river can come back to its former glory,” insists Basil, who continues to work with the tidy towns, the canoe club, Foróige and the likes of the Men’s Shed.

Cllr Noel Tuohy was on hand on the morning to voice his support: “Illegal dumping is a huge problem across the county and the country and those responsible should be named and shamed.

“It’s just not acceptable and it’s sad that the lads have to get in a clean it up and I commend them for tacking such a dirty job.”

For Ray Harte of the Portlaoise Men’s Shed this is the kind of project that allows them to demonstrate their community spirit and ethos as well as their skill set.

“The lads are all doing savage work here with the community garden and we see the river as part of the fabric of the Town and the clean-up is part of the bigger picture for the Triogue Blueway project.

“It’s creative, it’s positive and it’s our contribution, we want to leave a legacy, not just a one-off clean-up. We hope to support and encourage other communities to take on similar ventures as it’s about our environment and helping to support biodiversity in nature along the waterway. 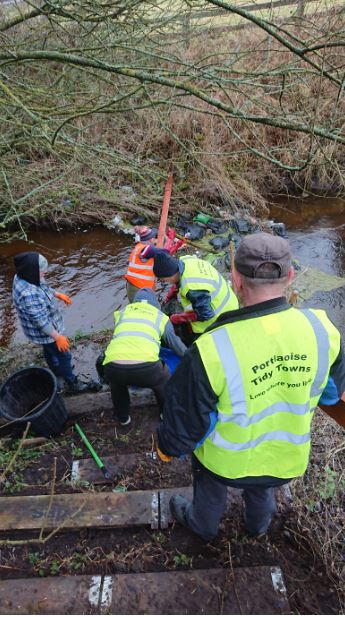 “Along the way hopefully it will also illustrate the kind of things Men’s Shed can achieve and make us more sustainable too.”

Providing bird boxes, outdoor furniture, benches and such equipment made to order are among the services provided to other groups by the Portlaoise Men’s Shed which was established in February 2013.