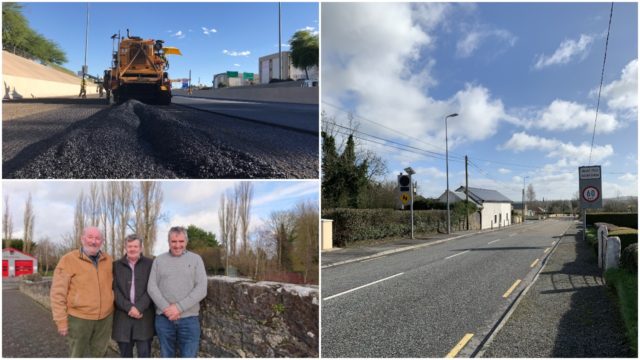 It is less than three months until the Elections and our sevent Election Diary is now here.

An overflow car park in Portarlington is to receive a new tarmac surface, Cllr Aidan Mullins has announced.

The Sinn Fein Cllr asked the Council to provide this back in February and has now received confirmation that work will begin soon.

He said: “I put down a Notice of Motion at the February Municipal District Meeting requesting that the Council put in a proper tarmac surface with line marking in the new overflow car park beside the Community Creche, Leisure Centre and Community Centre in Portarlington.

“I’m delighted to announce that the Council has just confirmed that they are going to carry out these works in a few months time.

“Works are also due to start shortly to use the funding from the Town and Village Renewal Scheme to continue under grounding the overhead cables on Lower Main Street near the Square.

Eoin Barry Labour Party Candidate in the Graiguecullen-Portarlington Municipal District is calling for traffic calming work near Newtown School to be completed.

He said: “The new pedestrian crossing near Newtown National School is a welcome addition to the area and has long been needed.

“However, the work on the signage to warn motorists about the school, needs to be completed.

“This situation must be unique in Ireland, where we have a speed limit increase from 50kmh to 60kmh directly before a school.

“The amber 30kmh signs near the school are not operational and this work should be completed. Aside from the school the local area has a childcare facility and a credit union.

“It is a similar situation near the Crettyard GAA pitch. The Traffic calming measures at Newtown cross were very effective and reduced the huge numbers of accidents that were occurring there every year.

“However, the speed limit directly outside the football pitch is 100km and visibility at the entrance is quiet poor. We now have a pavement all the way to the pitch, but this has become overgrown and hasn’t been maintained.

Local election candidate Ollie Clooney is to hold his formal campaign launch on Wednesday next, March 20.

It will take place in the Castle Arms Hotel in Durrow at 8pm.

Supporters of the independent candidate say that the turnout and speakers at the launch will reflect the broad community support there is for their man across the Durrow-Cullahill area as he attempts to win a seat in the 6-seater Borris-Mountmellick electoral district which runs from Rathdowney to Rosenallis.