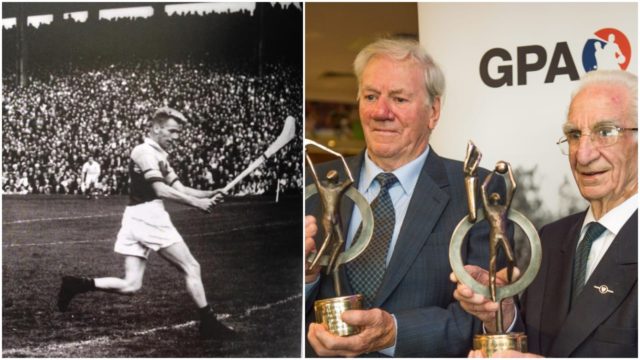 Tributes have poured in following the death of three-time All-Ireland hurling winner with Wexford and son of Laois Ned Wheeler.

Wheeler was born in Rathdowney in Laois, grew up in Kilkenny and settled in Wexford town in his teens.

Lining out a either centre-forward or midfield, Wheeler was part of the great Wexford team which contained the likes of Nicky Rackard, Art Foley, Bobby Rackard and Nick O’Donnell.

In 2014, Wheeler received a Lifetime Achievement Award from the GPA.

Faythe Harriers confirmed the news on social media, while paying tribute to the man who was, ‘a gentle giant’.

Ned won 3 All Ireland & 6 Leinster Senior Hurling medals with Wexford, as well as 3 Club Senior titles with the Faythe Harriers during his illustrious career.

“Ned later went on to train and coach adult and underage teams in the club. A gentle giant, with a permanent smile when he greeted you, he will be sadly missed. May He Rest In Peace.”

President of the GAA John Horam also paid tribute to the man who gave Wexford fans so much joy, both in his playing days and contributions to hurling in later years.

“Ned Wheeler will forever be revered as an icon by the generation of hurling fans who reveled in his exploits for Wexford between 1949 and 1965.

“The extraordinary length of service is a testament to a player who was a three-time All-Ireland winner playing at midfield and centre forward and who could always be relied upon to give of his best for club, county and province.

“Ned and his colleagues on those Model County teams laid a path for the heroes who came after and exists right through to the present day.”

Ned, beloved husband of Kathleen and loving father of Ann, Marie, Catherine, Ursula and the late Eamonn and Deirdre, brother of the late Liam.

Reposing in Mulligans Funeral Home, The Faythe, Wexford on Sunday from 3pm until removal at 7pm to The Church of the Immaculate Conception, Rowe Street.

Funeral Mass on Monday at 12 noon. Cremation will take place privately. Family flowers only. Donations in lieu if desired to the Irish Cancer Society.