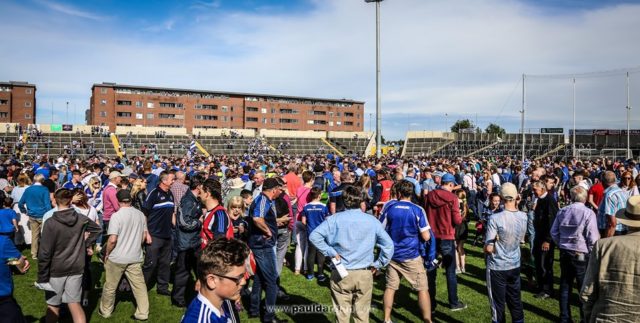 We’re still recovering from yesterday but we’ve managed to gather ourselves together just enough to be able to record our latest Podcast.

The Laois hurlers sent Dublin crashing out of this year’s All Ireland championship thanks to a thrilling win.

In a heroic performance, Laois led from start to finish and defied their massive outsiders tag.

In what may be deemed as the biggest upset to hurling this year, Twitter at home and abroad went wild as the final result came in.

Laois were outstanding – as they recorded arguably the county’s biggest hurling win since beating Wexford in the Leinster hurling semi-final in 1985.

The mighty Buff Egan was even there to witness it and he was then taken for dinner, drinks and some celebratory golf by Ross King and Jack Kelly.

What it all means is that Laois are into the All Ireland quarter-finals for the first time in 40 years.

They’ll play Tipperary in Croke Park next Sunday at 4pm as part of a double header with the other quarter-final between Cork and Kilkenny.

Meanwhile, the Laois footballers saw their season ended by Cork in Thurles in Round 4 of the All-Ireland Football Qualifiers.

But the inter-county season on the football front will continue for another week as the Laois U-20 footballers are set to take on Meath in the Leinster semi final on Tuesday evening.

To look back at all of that, and ahead to what is to come, Alan Hartnett and Steven Miller were joined by Midlands 103 commentator Jack Nolan on our latest Podcast.