Despite a High Court against the protest, local beef farmers are continuing their presence outside the Dawn Meats factory in Rathdowney this weekend.

The protest, which being carried out independently and isn’t backed by any of the farm organisations, has been ongoing since last Sunday. The Beef Plan protest ran for almost two weeks earlier this summer before being suspended for talks with the Meat Industry Ireland (MII).

These independent protests are at various factories around the country, with the processors taking the High Court actions in an attempt to bring an end to them.

While it hasn’t happened yet, the High Court could instruct Gardai to make arrests of those in breach of the ruling.

Farmers are hugely frustrated over a number of issues in the industry. Among those is the percentage of the end price they receive for what they produce as well as a number of other regulations including the age limits the animals must be killed by and rules surrounding how often the cattle can be moved.

Representatives from Dawn Meats met with some of the protesting farmers in Abbeyleix on Friday morning but no progress was made..

The protests then escalated on Friday evening as a stand-off ensued at the factory gates when the protestors wouldn’t allow a couple of lorries to take meat away from the factory.

Eventually, after about an hour and a half, the lorries reversed back after failing to make their exit.

Then, late on Friday evening, the farmers were visited by Kilkenny Fianna Fáil TD John McGuinness. While Rathdowney isn’t in Mr McGuinness’s constituency, a number of Kilkenny farmers send their cattle to be killed in Rathdowney.

The protest had been visited earlier in the week by Laois TDs Sean Fleming and Brian Stanley.

In a nod to the injunction, the protestors donned masks so they couldn’t be identified.

One of the protestors, who spoke to LaoisToday but didn’t wish to be named, said that the farmers made two “major concessions” this week by allowing cattle in ahead of the visit of a Chinese delegation who are looking at the meat facilities around the country with the view of importing more Irish beef to China and by allowing meat out on Friday morning ahead of the meeting between the two sides.

“But there was no payback whatsoever from their side.

“None of us want to be here doing this. We have plenty to be doing at home on our farms – but there is a societal injustice in the meat industry and farmers are taking the brunt of it.

“We are a group of like-minded people – we don’t have a spokesperson or leader but we just wanted to be treated right for what we’re doing. We’ll be here 24/7 until we get what we want.

“The people of Rathdowney have been very encouraging of us and the support is growing. There’s money being left into the pub across the road to feed us – some lads are doing 17-hour days here and since the start of the Beef Plan protests a couple of weeks ago there has been between 5,500 and 6,000 man hours put in.” 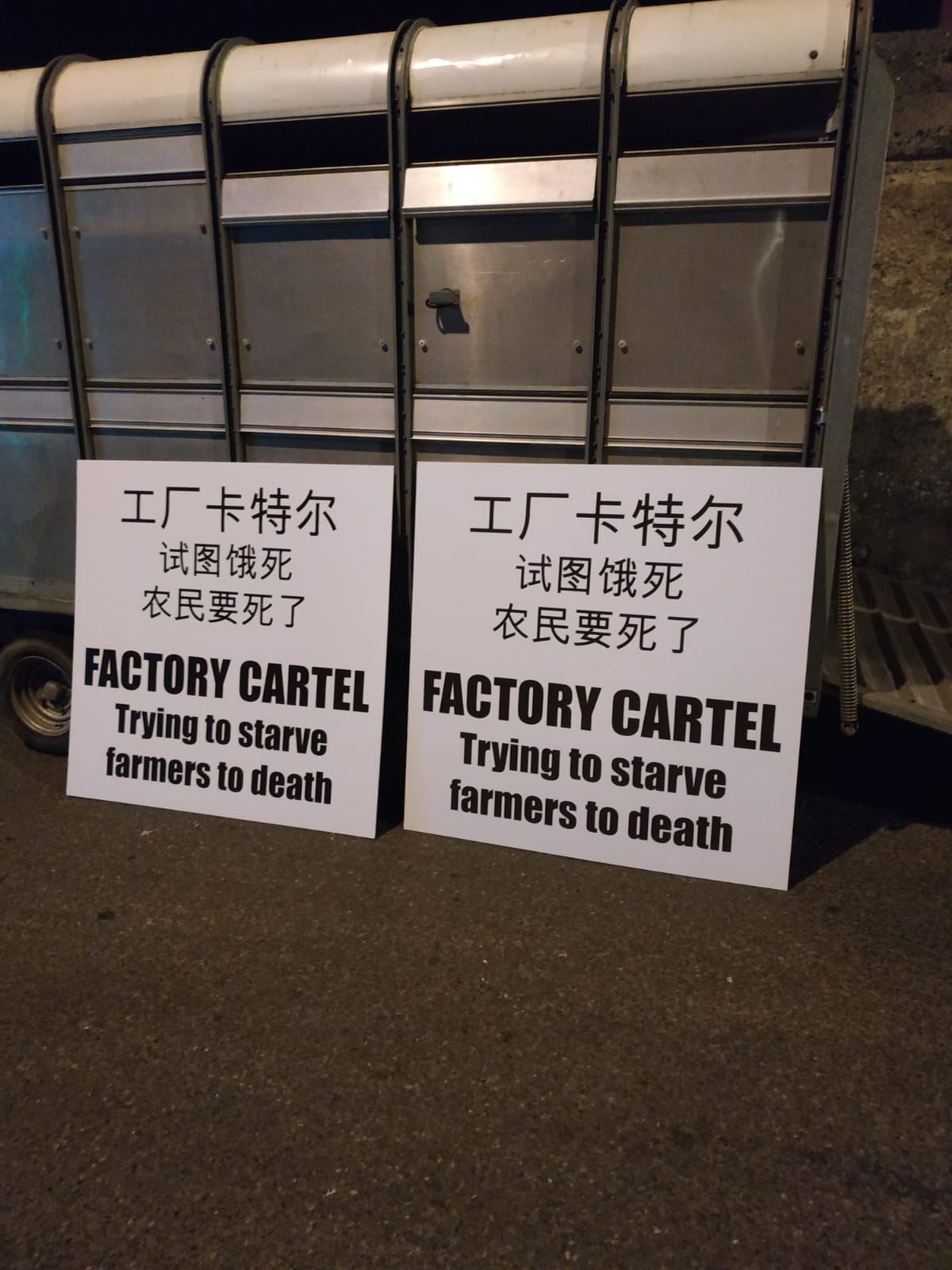 A number of factories have ceased production on the back of the action.

“It is always our preference to avoid recourse to legal action, but the illegal nature of the protest activity has made it necessary to protect our business, our employees, our supplier farmers and our customers who depend on us being able to operate,” said Dawn Meats in a statement.

“It is by growing the demand for Irish beef and diversifying into new markets, rather than through illegal protesting, that the current challenging market environment can hope to be addressed.

“Through our industry group representative body Meat Industry Ireland, we are open to further discussions with farming groups on their concerns but only when the illegal blockades of our facilities are removed and normal processing resumes.”