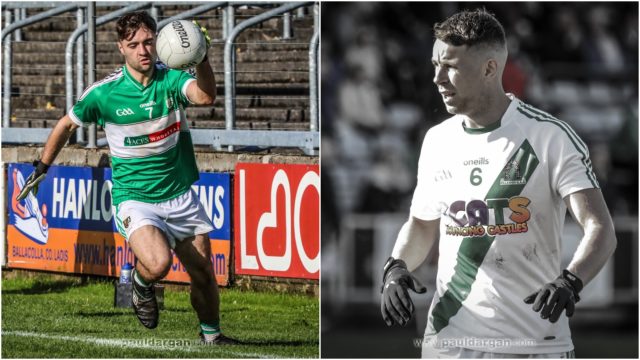 Killeshin and Ballyfin played out a thrilling Laois SFC semi-final replay in O’Moore Park on Wednesday night with Killeshin eventually prevailing on a 0-17 to 1-10 scoreline.

The stand in Portlaoise crackled with a great atmosphere all evening as the clubs battled it out to reach a first final in their history.

Here we look back at some of the various talking points.

For the first time in the club’s history, Killeshin’s senior footballers will line out on county final day.

Portlaoise await in the county final on Sunday week, October 13, in what will be your typical David v Goliath affair. Portlaoise are going for three-in-a-row, a 12th in 13 years, appearing in a 13th straight final and going for a 34th title overall.

Killeshin have watched their neighbours Graiguecullen, Arles-Killeen, Arles-Kilcruise and Ballylinan all get to a final outing over the past decade. Now it’s their time.

But they won’t want to be just making up the numbers – they’ll be hoping to cause one of the greatest county final shocks of all time.

And there’s few can say they don’t deserve it either. With the possible exception of their opening round win over a weakened Stradbally side, this was their best performance of the championship.

And what a time to give it.

In your biggest games, you need your big players standing up. And Killeshin’s big players certainly did. Stephen Attride once again sacrificed his game to keep tabs on the very dangerous Sean Moore and he once again did it brilliantly – he also managed occasional bursts up the field, one of which led to a crucial point for Cathal Brennan.

And speaking of Brennan – what a performance from Killeshin’s elder statesman, who hit four points from play on the back of scoring 1-1 in Sunday’s drawn game. Brennan has been a go-to man for Killeshin for the last 17 or 18 seasons and he delivered again here. As did Laois player Eoin Lowry who is a beacon of consistency, capable of winning his own ball and taking on shooting responsibility.

Free-taker David Aston was almost flawless too, kicking eight points in total including a ’45, a couple of long-range frees and an important one from play in the second half.

Evan Lowry also had a fine game and him being available for the full 60 minutes having been black-carded early on the last day was a huge plus.

While the drawn game on Sunday was thrilling, both teams seemed nervous and a bit tentative at times. That certainly wasn’t the case on Wednesday night as they went at it at an incredible pace from the start.

Both sides were understandably keen to get their match-ups right but this was as honest, hard-hitting and high-tempo game you could hope for. It was, for the most part, a right good game and while Maurice Deegan had to dole out a couple of yellow cards and Ricky Quillinan picked up a second in injury time, there was barely a dirty stroke in the entire game.

In the biggest game ever for both clubs, they both played it in the right spirit.

Killeshin’s system is disciplined to the last and you can be sure the Portlaoise brains trust were paying plenty of attention.

They go short with almost all of their kickouts, flood the defence and break at huge pace.

While Stephen Attride did a great job on Sean Moore, he did have huge support from his team-mates that crowded the space around the ‘D’. And when Killeshin did turn over the ball, they broke at incredible speed to a forward line that can take their chances.

Ballyfin, for their part, played very well too, though without Moore’s first-half goal they may have struggled to keep in touch.

They did very well sending long balls into Ricky Quillinan – and would have benefitted hugely from the offensive mark had it been in play – but any time they got within a point, Killeshin were able to respond.

Brave Ballyfin come to the end of the road

We’ll miss Ballyfin now that they’re gone. What a breath of fresh air they’ve been to this year’s championship.

A year on from just about staying in the senior grade, and coming off the back of a league campaign where they’ll played in the fourth division, they have lit up the championship with a series of fine performances.

With the exception of their first game against Graiguecullen, have been involved in one exciting game after the next and caused two huge upsets by beating Arles-Killeen and O’Dempsey’s when they were 3/1 and 4/1 outsiders respetively.

There was so much to admire about them: the scoring power of Sean Moore (he finished his campaign with 6-21, level with Portarlington’s Colm Murphy in joint second on the scoring charts behind only Crettyard’s Evan O’Carroll); the excellence of James Finn and Ricky Quillinan in midfield; the performances of James Moore, Jack Priestley and Louis Duff up front, the shot-stopping of Robert Foran; the bravery of the likes of George Lanham and Ciaran Fingleton in defence and the energy and quality of the Connollys, in particular Darragh whose form was that of a player of the year.

They finish the year as the highest-scoring team in the championship (both overall and on average) and they’ll be keen to build on their fine form in 2020.

And busy times continue for Ballyfin

With half their team also being dual players, Ballyfin have had a very busy schedule over the last couple of months.

Between hurling and football, they’ve played 10 championship games in 10 weeks – senior football and senior ‘A’ hurling – and have had five in the last 25 days alone, many of them in poor weather conditions and on a heavy pitch.

And they’ve little time to dwell on this loss as they’re back in hurling action on Monday night when they face The Harps in the Laois SHC ‘A’ semi-final.

After taking a battering on Sunday last, the O’Moore Park pitch held up well on Wednesday night. With the exception of the heavily sanded goalmouths, the pitch was in fine condition given the rain that fell at the weekend and again on Monday after Sunday’s games.

Groundsman Colm McEvoy deserves credit for the care given to a playing surface that just gets so many games. Two hurling double headers are scheduled for this Saturday and Sunday as the games continue thick and fast.