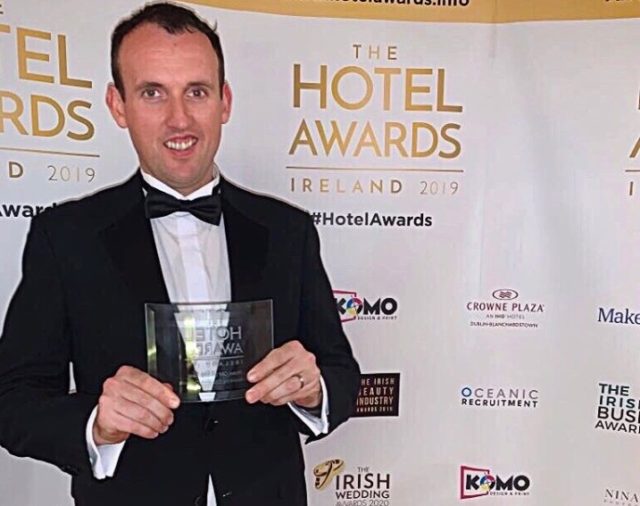 Ger Alley, General Manager of The Heritage hotel in Killenard, was among the winners at the Hotel Awards Ireland this week.

The Durrow native, who was appointed to the role in The Heritage in January, was named General Manager of the Year at the inaugural awards ceremony  in Dublin on Monday night.

These awards recognise the top hotels in Ireland and provide a platform to thank those who constantly deliver memorable experiences to guests.

“Ger has been with The Heritage since January and has brought with him a vast wealth of experience,” said the hotel in a statement.

“Some amazing changes have taken place since then and can be seen throughout the hotel.’

“From the refurbished ballroom and bar, our fabulous new signage around the grounds and most recently the transformation of our restaurant to a stunning area of sophistication! Well done Ger from all the team!”

“It’s a nice honour to be recognised but it’s on the back of a huge team effort here,” said Ger.

“We have a great team and we are building towards a very bright future within the FBD Hotels and Resorts group who have put huge investment in here since taking over,” he added.

“The team really are the key to the hotel’s success over the past number of months, I can’t begin to thank them enough for their huge efforts and involvement in getting The Heritage to where it is today.

“I look forward to continuing to work together with The Heritage team in creating a luxury hotel brand and experience for guests to enjoy.”

The Heritage offers one of the foremost experiences of Spa Hotels in Ireland and has been recognized as one of the top five in the country.

The Heritage Spa was recently crowned winner of ‘Best in Body Care’ at the prestigious Irish Tatler Spa Awards in Dublin earlier this month.

FBD Hotels and Resorts also own Castleknock Hotel in Dublin and Faithlegg in Waterford as well as two resorts in Spain, La Cala in Mijas and Sunset Beach Club in Benalmadena.

The new owners are currently undertaking a massive €3million refurbishment of the hotel as well a complete rebrand. An official launch party which is being hosted by RTE’s Marty Whelan is being held on Thursday, November 7.

For more information or to book your next break visit theheritage.com.