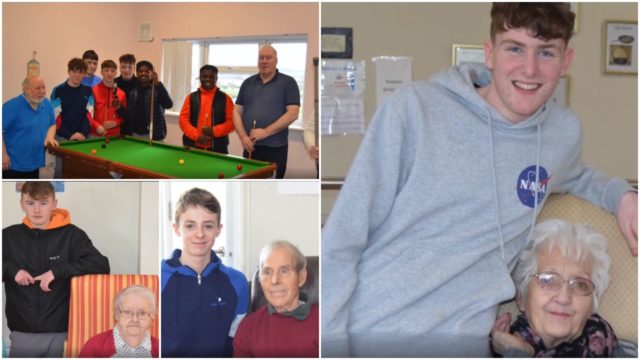 This would warm your heart.

For the last six weeks, a group of Transition Year students from St Mary’s CBS Portlaoise have visited a nursing home in Stradbally.

The lads from TY A, under the guidance of teacher Stephanie O’Neill, have spent hours with the residents of Droimnin Nursing Home since Christmas.

This is part of an initiative called the ‘Buddy Project’ and it proved to be highly successful for both the students and the residents.

Mrs O’Neill explained: “We were delighted to be able to take part in this project with Drominin Nursing Home.

“Every Thursday for the past six weeks, the lads took part in various activities such as baking, pool, memory and word games.

“They got to know the residents and built up a great rapport.

“Both the residents and students greatly looked forward to it every week and I know the lads will miss going there now that it has come to an end.”

The lads have put together a brilliant video from their six weeks.