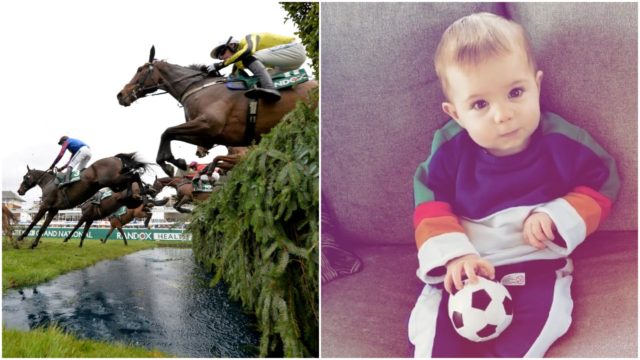 If this weekend was different, 10 Laois lads should be among thousands over in Aintree for the annual horse racing festival – as they have done for the last 11 years.

However, the Coronavirus pandemic means that racing is off for the foreseeable future and so too is the group’s, who include men from Spink, Timahoe, Camross and Ballyroan, annual trip.

James Fitzpatrick, John Lowry, Padraig Clancy, Willie Lalor, Michael Delaney, Jim Ramsbottom, Fintan Fitzpatrick, Stephen Mortimer, Mick Scully and Mick Brennan got together though and decided to turn their disappointment into an opportunity to raise money for a boy who desperately needs it – little Dan Donoher.

James Fitzpatrick explained: “Tomorrow, April 4, should have been the running of the Aintree Grand National. But due to circumstances that we all know, this is not going ahead this year.

“So this got me thinking, that maybe we could do something here and bring the racing family on board with us.

“So tomorrow morning, at 8am, our group are donating €1,000 to the fund and after spending the week talking to racing trainers and people in the industry, big and small, the response I am getting is nothing short of amazing.

“So, what we are looking for is for everybody to come on board with us on Saturday and help make this a huge success for this little man and instead of placing your bet on the Grand National, place your bet on Dan and donate what you can, big or small to the “Aintree Grand National Do It For Dan” fund.”

The lads have set up a fundraiser on Facebook which has already raised almost €3,000.

But anyone who is not on Facebook can donate via the GoFundMe page that also already been set up.

James said: “Anybody not on Facebook can go onto the “Go Fund Me” page and donate to the “Do It for Dan” fund.

“Please please help us make tomorrow a success for this local family and very worthy cause.”

The reaction to the fundraiser has been huge with €512,000 raised so far from more than 14,000 different people.