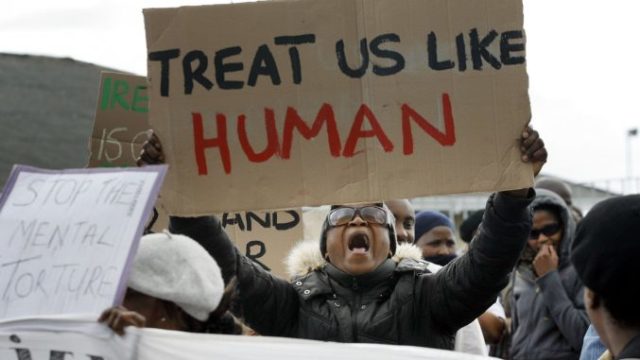 This pandemic is far from over, whilst hopefully it remains contained, on our Island.

Here in Laois we face the second week of restrictions, which I believe to be necessary, in our collective responsibility to ensure safe public health and our shared desire that children will return to school in September.

The recent spike of Covid-19, highlights that the vulnerable remain very susceptible and exposed to this virus.

Direct Provision residents, meat factory workers and members of the travelling community accounted for many of the confirmed cases in recent weeks.

Remember cases are real people not just numbers. I pray that all will make a full recovery and return to good health.

Half of people living in direct provision have been unable to social distance from other residents during the Covid-19 pandemic, while more than 40 per cent continue to share a room with a non-family member, according to new research seen by The Irish Times.

The Irish Refugee Council’s (IRC) Powerless report, which examines the experiences of direct provision residents during the pandemic, says asylum seekers are suffering “fear and trepidation” because of their “inability to control” their health and safety during the pandemic.

The call to end direct provision has become “more compelling than ever” in the context of the pandemic, the council says. The new Government has committed to ending the system.

Two levels of safety standards have been created during the Covid-19 pandemic, according to IRC chief executive Nick Henderson. “One for the general public, where social distancing is encouraged, and another for people in residential settings such as direct provision, where sharing of intimate space is implicitly accepted.”

The study was carried out through an online survey made available to residents between April and June 2020.

The IRC found 55 per cent of people surveyed felt unsafe due to the pandemic, while 50 per cent were unable to social distance themselves from other residents. Some 42 per cent said they were sharing a room with a non-family member.

More than half of respondents said they shared a bathroom with non-family members and 53 per cent said they continued to eat in a communal dining area.

Nearly one-quarter said they did not have regular access to soap and hand sanitiser in their centre.

One remarked: “We are powerless, just sitting ducks waiting to die.”

A pregnant woman said she lived in “constant fear of being infected” as she shared a kitchen with more than 100 people.

Some participants said they were concerned about the behaviour of fellow residents as some were acting irresponsibly.
Many complained about a lack of communication from managers about the spread of the virus, saying there was “no visibility” about the number of cases at their centre. However, in a small number of cases, respondents said managers had been a source of support in recent months.

Respondents said some local communities presumed residents had Covid-19 because they lived in direct provision, while one respondent recalled having been described as “Covid people”.
Parents who took part in the survey said the closure of schools meant their children had to learn in overcrowded conditions and were left without a “sense of normalcy” in their lives, according to the report.

Of the 204 respondents who said they were employed, more than one-fifth worked in hospitals, other healthcare settings, or the care sector. Those in direct provision who lost their jobs because of the pandemic were initially not eligible for the Covid-19 pandemic unemployment payment (PUP).

In May, a letter signed by 40 organisations and led by the IRC requested that asylum seekers, who currently receive €38.80 per week for an adult and €29.80 for children, receive an additional €20 per week during the pandemic. The request was rejected by then minister for social protection Regina Doherty.

However, on Friday, Minister for Social Protection Heather Humphreys announced that direct provision residents would now be eligible for the PUP, which she said will be paid retrospectively to them from when a person was laid off. Residents will also be able to claim the Covid-19 illness benefit payment, said the Minister.

This change in policy follows months of campaigning by support groups and the Taoiseach’s assertion earlier this month that direct provision residents be treated the same as any citizen in terms of social protection supports during the Covid-19 pandemic.

The IRC report also calls for a “constructive” internal inquiry into the Department of Justice’s handling of centres during the pandemic and requests that all people who are unsuccessful in their asylum application, but worked in healthcare during Covid-19, be given permission to remain in the Republic.

The decision-making process for international protection applications should now restart to avoid further delays, it recommends.