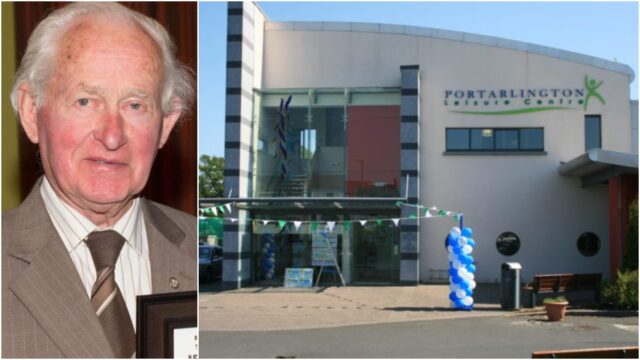 There are some people that go over and above for their community and the late Niall McElwaine in Portarlington was one such man.

The Donegal native was principal of St John’s Vocational School in the town from the mid 1950s until the late 1980s and throughout that time and beyond he was heavily involved in so many aspects of Portarlington life.

He was particularly associated with the development and ongoing fundraising for the Portarlington Swimming Pool. He passed away in January of this year.

And at this week’s meeting of the Graiguecullen-Portarlington Municipal District in Laois County Council, Cllr Aidan Mullins called for the access road around the Leisure Centre in the town to be named in his honour.

Listing off his service to the area – which included the Civil Defence, Community Games, Meals on Wheels, St Vincent de Paul and Comhaltas – Cllr Mullins said that “this gentleman gave over 50 years of dedicated service to Portarlington”.

“I could think of no more deserving person.”

A response from Laois County Council stated that there is “no policy for naming infrastructure in Laois” but that “the process of preparing a policy on the naming of infrastructure … has commenced”.

“It is expected that this will progress to full council for adoption by the end of Q2 2021.”

However, this approach didn’t appease the councillors in attendance.

“How can you name roundabouts and say that this will take another six months,” said Cllr Mullins.

“It can’t be a complicated policy,” agreed Cllr Padraig Fleming.

SEE ALSO – Love Laois: Have an online element to your business? Let us know and we’ll include it in our directory