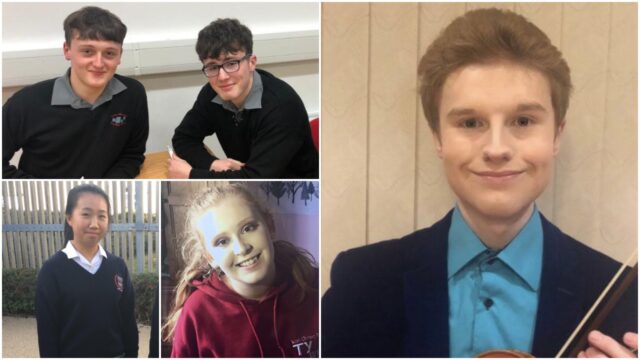 A total of six Laois students have been presented with prestigious Trinity College Entrance Exhibition Awards for their Leaving Cert results.

On Tuesday, we reported that Jodie Walsh, who hails from Portarlington and completed her Leaving Cert in Colaiste Iosagain in 2020, received an award.

And now five more, two from Portlaoise CBS, two from Scoil Chriost Ri and one from Mountrath Community School, have followed suit.

James White and Dean Winters are the Portlaoise CBS duo while Aisling Ahearn and Angela He were recognised from Scoil Chriost Ri.

Meanwhile Mountrath CS’ Senan Moran, who is a talented musician, was also presented with the award.

Students from every county in Ireland and 15 countries in the EU have been awarded special Entrance Exhibition Awards from Trinity College Dublin this year.

The awards go to the student accepted into the first year of a full-time undergraduate degree programme who achieves the highest points among Trinity entrants from their secondary school, above a minimum of 500 CAO points.

Many former awardees have gone on to make a significant contribution to the economic, cultural, and political life of Ireland and beyond.

Past Exhibitioners include Tanaiste and former Taoiseach Leo Varadkar.

Changes made to the awards scheme in 2018 meant that students who achieve the highest points among Trinity entrants from their secondary school with a minimum of 500 points in the Leaving Certificate (or its equivalent second level final examinations) are eligible for an Entrance Exhibition Award. This includes bonus points for Mathematics.

Previously, any students receiving 560 or more points (excluding bonus points) were awarded Entrance Exhibition Awards which meant that there could be up to 20 students from any one school.

Awardees will receive a certificate and a €150 book token.