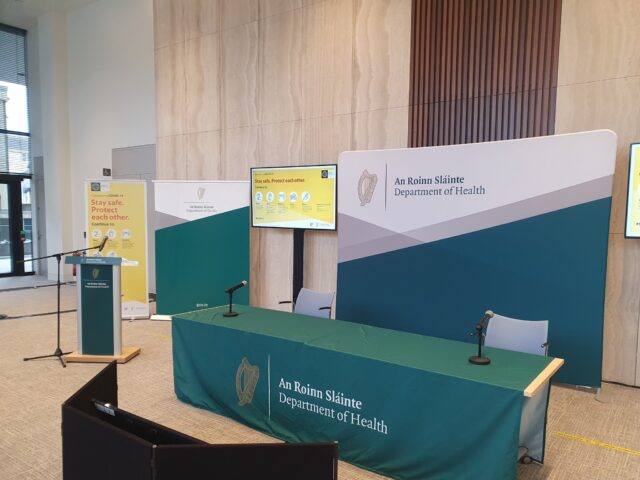 10 of these deaths occurred in March, 12 occurred in February, 13 in January, and 3 occurred earlier than this. One further death is under investigation.

The median age of those who died was 81 years and the age range was 0-97 years.

As of 8am today, 460 COVID-19 patients are hospitalised, of which 107 are in ICU. 26 additional hospitalisations in the past 24 hours.

Dr Ronan Glynn, Deputy Chief Medical Officer, Department of Health said: “We have been made aware of four preliminary reports of stillbirths potentially associated with a condition called COVID Placentitis.

“These reports should be interpreted with caution as the coroners have not yet concluded their findings.

“The HSEs National Women and Infants Programme is aware of and is monitoring the situation and has issued a related notice to obstetric departments. I would ask that the privacy of all of those affected by this disease continue to be respected at all times.”

Dr Breda Smyth, Director of Public Health, HSE West said: “We have confirmed that more than 200 households have had an outbreak of COVID-19 that are linked back to the outbreak among students.

“We know that the new variant is more transmissible, and, based on the latest data, approximately a third of household contacts of confirmed cases in Ireland are now testing positive.

“If you display any symptoms of COVID-19, you must immediately self-isolate in your room and phone your GP.

“We know how to break the chains of transmission of this disease. We must all continue to make every effort to limit our social contacts, stay home and stay safe.”

“As we know, the evidence points towards face mask use in the community reducing transmission of COVID-19. However, in young children, the benefit of face masks is likely small and may be affected by their reduced ability to comply with face mask wearing.

“The expert advisory group has not advised any change to the guidance on mask wearing in children.

“The best way to ensure that schools remain a low-risk environment is by the continued use of a combination of public health measures, such as physical distancing, hand hygiene, cough etiquette, increased ventilation and by not attending when you have symptoms of COVID-19.”

Professor Philip Nolan, Chair of the NPHET Irish Epidemiological Modelling Advisory Group, said: “The R number has at least remained stable and may even have decreased slightly, this is reflected in the week-on-week decline in cases that has been reported recently.

“This represents an extraordinary effort over a very challenging nine week period that has brought us from 6,500 cases to under 600.”

It said the roll-out of the vaccine is “only limited by supply” and that it must be flexible to accommodate “unforeseen events”.

The department said that the 500,000th dose will be administered within the next week, adding that vaccine deliveries for this month are “still being finalised with manufacturers”.

“Advance planning for April, May and June shows Ireland receiving one million-plus doses per month in Advance Purchase Agreements. The delivery timeframes are still being worked on with manufacturers,” it said.

SEE ALSO – Laois Abroad: From The Heath to the Cayman Islands – life by the beach, GAA and missing a decent pint