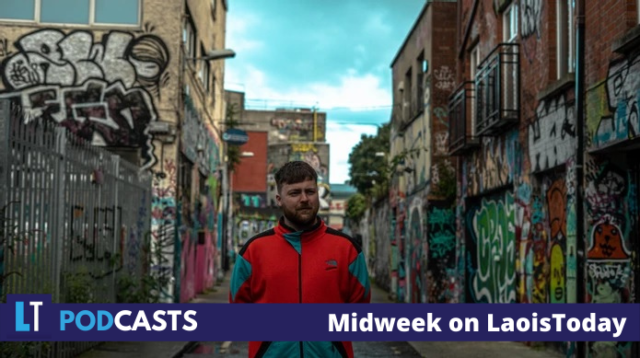 The lockdown that the country has been under for most of the last year has had plenty of negatives no doubt – but there have been some positives too.

And that’s something local singer Chris Conroy has realised over the past 12 months as he has managed to release two new songs, both of which he had wrote a number of years ago but had never committed to making them public.

He released his debut track Dive in July of last year while his second track Sink or Swim is set to be officially released in the coming weeks.

His music stems from a folk and ballad style with a hip-hop influence thrown in too to give his work a real authentic feel. And while his immediate family aren’t music-orientated, his grandfather, who he is named after, wrote the much-loved Portlaoise Queen song many years ago.

“I wrote back Dive in 2016,” the Portlaoise native said on this week’s LaoisToday Midweek Podcast. “I had it recorded, waiting for perfect time but figured out there is no such thing as the perfect time.”

And in the coming weeks, Sink or Swim will be available.

“It’s another song I wrote ages ago. Another song I hold close to my heart. It’s about trying to chase your dreams but also not trying to fall into anything that would stop you from that.

“It’s one of my favourites and I’m very excited to share it with people.”

While the last year has been challenging for everyone, seeking out the positives has been hugely important to Chris.

“The negatives there are no festivals or gigs. We had done pub gigs but had never played festivals so that’s a negative.

You can listen to the interview in full below on Soundcloud from 33 minutes or subscribe on Apple Podcasts or Spotify to never miss an episode.