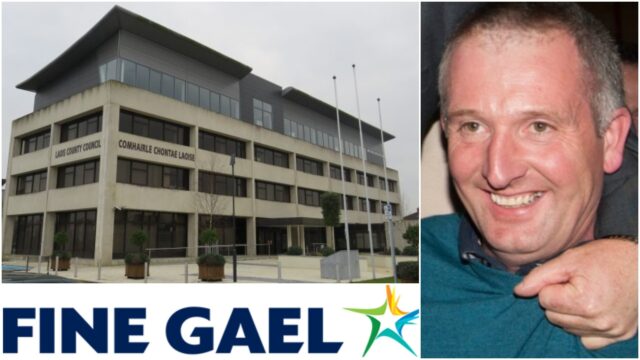 A new councillor will be officially co-opted to Laois County Council later this month after Fine Gael today completed the process of electing a replacement to fill the seat left vacant by the retirement of Tom Mulhall.

PJ Kelly from the Ballybrittas-Emo-Vicarstown branch has defeated 2019 Local Election candidate Vivienne Phelan from Stradbally with the votes counted in Fine Gael HQ in Dublin today.

The Laois-Offaly Fine Gael AGM this evening will be formally informed of the result.

With the backing of his own branch as well as Killeen (the only other branch in the area and home of Aisling Moran, the party’s other councillor in the area), it’s understood that Mr Kelly recorded a relatively comfortable win. The exact result is not known. Ms Phelan had been supported by Laois Young Fine Gael.

Party members in the Graiguecullen-Portarlington Municipal District had cast their postal votes over the past two weeks following an online convention on March 22.

Kelly will now officially fill the seat previously held by Tom Mulhall from 2009 to earlier this year. Mulhall was successfully elected in 2009, 2014 and 2019 but stepped down from his role in January having suffered a stroke last summer.

Kelly, who lives in Courtwood with his wife Mai and young family, is a long-time supporter of Tom Mulhall and was Director of Elections for his three campaigns.

A farmer, he has been a member of Fine Gael for the best part of 30 years and has canvassed for a number of TDs in the area including Charlie Flanagan, Martin Heydon, Marcella Corcoran-Kennedy and Olwyn Enright.

He is the current secretary of the Ballybrittas-Emo-Vicarstown branch as well as party chairperson of the Graigue-Port district.

As well as that he is strongly involved in his local community and is the current treasurer and a former chairman of Courtwood GAA club, who he has represented as a player for a long number of years.

He was also a founding member of both St Conleth’s ladies football club and St Paul’s juvenile GAA club.

Councillor Kelly said: “I am honoured to serve on Laois County Council and continue on some of the fantastic work of Tom Mulhall.

“I will work hard on local issues such as rural road maintenance, tackling illegal dumping and bringing projects initiated by Tom, like the sewerage system in Ballybrittas, over the line.

“I look forward to working with the people of the area.”

Fine Gael Laois Offaly TD, Charlie Flanagan said: “I have known PJ Kelly and his family for many years.

“He is rooted in his local community and will be an excellent Councillor.

“Admittedly, PJ has big shoes to fill succeeding Tom Mulhall but he’s well equipped for the job ahead.

“I look forward to working closely with PJ for the betterment of all in the Portarlington/Graiguecullen area.”

Minister of State at the Department of Agriculture, Food and the Marine, Martin Heydon, said: “Congratulations to PJ Kelly on his success in the co-option convention for Tom Mulhall’s council seat.

“Tom leaves a great legacy of community service from his time on Laois county council.

“I look forward to having as close a working relationship with PJ in his term as a member of Laois County council as I did with Tom, to deliver for the people of Portarlington, Killenard and Ballybrittas.“

Kelly will be co-opted to Laois County Council at their meeting on Monday, April 26, which will once again be held virtually. In normal times a newly co-opted council member would be joined by family and friends in the council chamber for their first meeting.

The last co-option to Laois County Council was in 2018 when Pauline Flanagan replaced the late Jerry Lodge for Fianna Fáil.

Kelly will now serve as a councillor for the next three years with the next Local Elections set to take place in 2024.