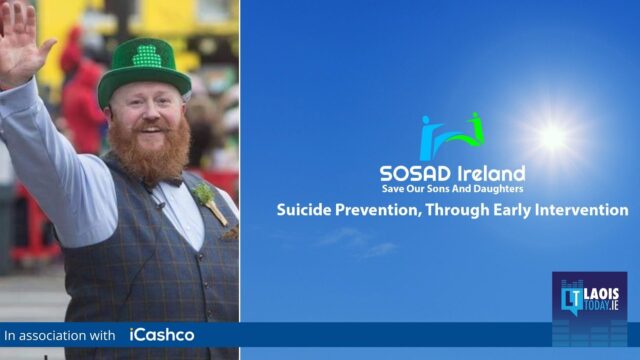 A suicide prevention group that is setting up an office in Laois are hoping that they will be operational in the county by late May/early June.

SOSAD (Save Our Sons And Daughters) Ireland is a service that provides a free counselling and support service to people who are experiencing mental distress and those bereaved by suicide.

A local group has come together to bring the office to Laois and one of their members, Christy Bannon, spoke to the recent LaoisToday Midweek Podcast.

He explained that Portlaoise has the largest population in the midlands but not, unfortunately, “the services we really need”.

Having been well known through his work with the Cycle against Suicide charity and speaking about his own mental health struggles, Christy was the ideal candidate to help bring SOSAD, who have been working in Ireland since 2007, to Laois.

“We’re now at stage where hope to have office open by end of May/first few weeks of June,” he added while also highlighting one of the main differences being that all of the money raised locally will be spent locally.

which Christy says will “go to fund an office in Laois”. “All money raised in an area stays in an area. It’s not a case of it going to head office and they decide where it goes.

“Have a group now very willing to work,” he said. “All services are free … and will help with all sorts of challenge … or if someone is bereaved by suicide they will provide suicide counselling”.

“We don’t think charities should be run for profit and executives getting paid exorbitant fees. (They should be) working hard to provide services in their locality.”

You can listen to the interview on full here on Apple Podcasts or on Spotify.