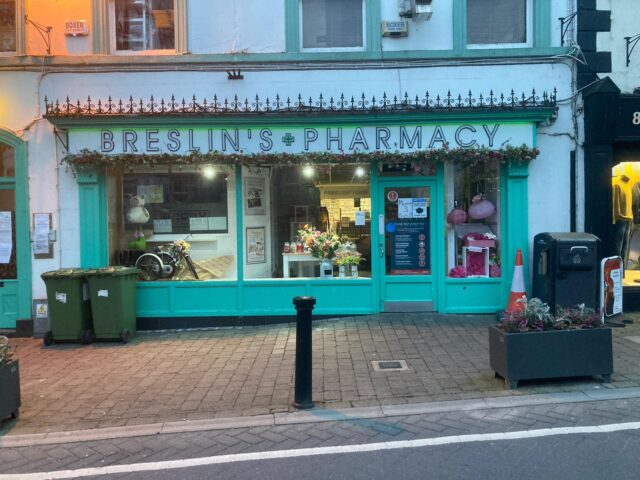 Yesterday marked the end of an era for the owners and staff of Breslin’s Pharmacy in Portlaoise as they served customers for the last time in their premises on the town’s Main Street.

When they re-open on Tuesday after the Bank Holiday weekend, they’ll be across town in a new unit in the Parkside Shopping Centre beside O’Moore Park.

Also moving to a new unit in Parkside is the Maryborough Family Practice GP surgery, often referred to locally as Dr Honan’s.

It ends a long association for both businesses who have been operating at the centre of Portlaoise for generations.

Breslin’s took over what was Gannon’s Pharmacy in the mid 1990s on the retirement of Jim Gannon, whose father had also owned a chemist’s shop in the town.

The re-location of Breslin’s will mean it’s the third pharmacy to move off of Main Street in recent years.

O’Loughlin’s Pharmacy was taken over by Chemco and moved to Lyster Square while the retirement of Roisin Adams and closure of that business was also taken on by Chemco.

It leaves Hughes Pharmacy as the last on Main Street though Chemco and Laois Pharmacy are close by in Lyster Square.

For the Maryborough Family Practise it will also make for a significant change.

“It will be the end of an era,” said Dr Michelle Byrne when chatting on the LaoisToday podcast earlier this year.

“Our surgery, while it has been a great building, the last few years we have probably outgrown it at this stage.

“It will be great to get into a new premises and facilities that are fit for the modern day which will be really exciting for everybody.”