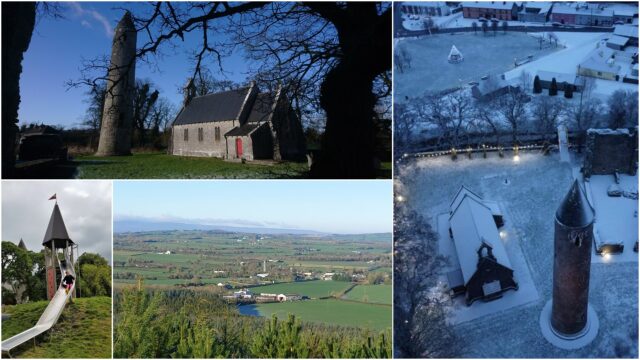 This piece by John Whelan originally appeared on his Vanhalla – Camper Heaven blog earlier this year.

We have learned many things and a great deal this past year.

One of them has to be to appreciate the appeal of attractions and amenities right there on our doorstep.

Generally we do have a great pride of place and as the poet did assert: ‘the savage loves his native shore’.

By the same token familiarity does breed contempt and from time to time we do need to be reminded of the richness of opportunity to enjoy the great outdoors right outside our front door.

A few years back when the National Ploughing Championships were held up the road in Ratheniska a lovely couple from Donegal stopped over with us for a couple of nights. I was intrigued by how fascinated they were with our area and our landscape, much of it, I must confess, I had come to take for granted.

The plush pastures, the expansive rolling fields, edged with undulating hills and divided by flush fat hedgerows and for your palette you would merely require the famed forty shades of green. As someone who has an ongoing love affair with Donegal this was a wake-up call.

They enjoyed their visit to the midlands, a stark contrast to the more rugged terrain of Tirconnell,  and that September knocked a good night out of it down in the village, where we are still fortunate to have two great family run pubs, Bergin’s and that most idiosyncratic of Laois names, Ramsbottom’s. 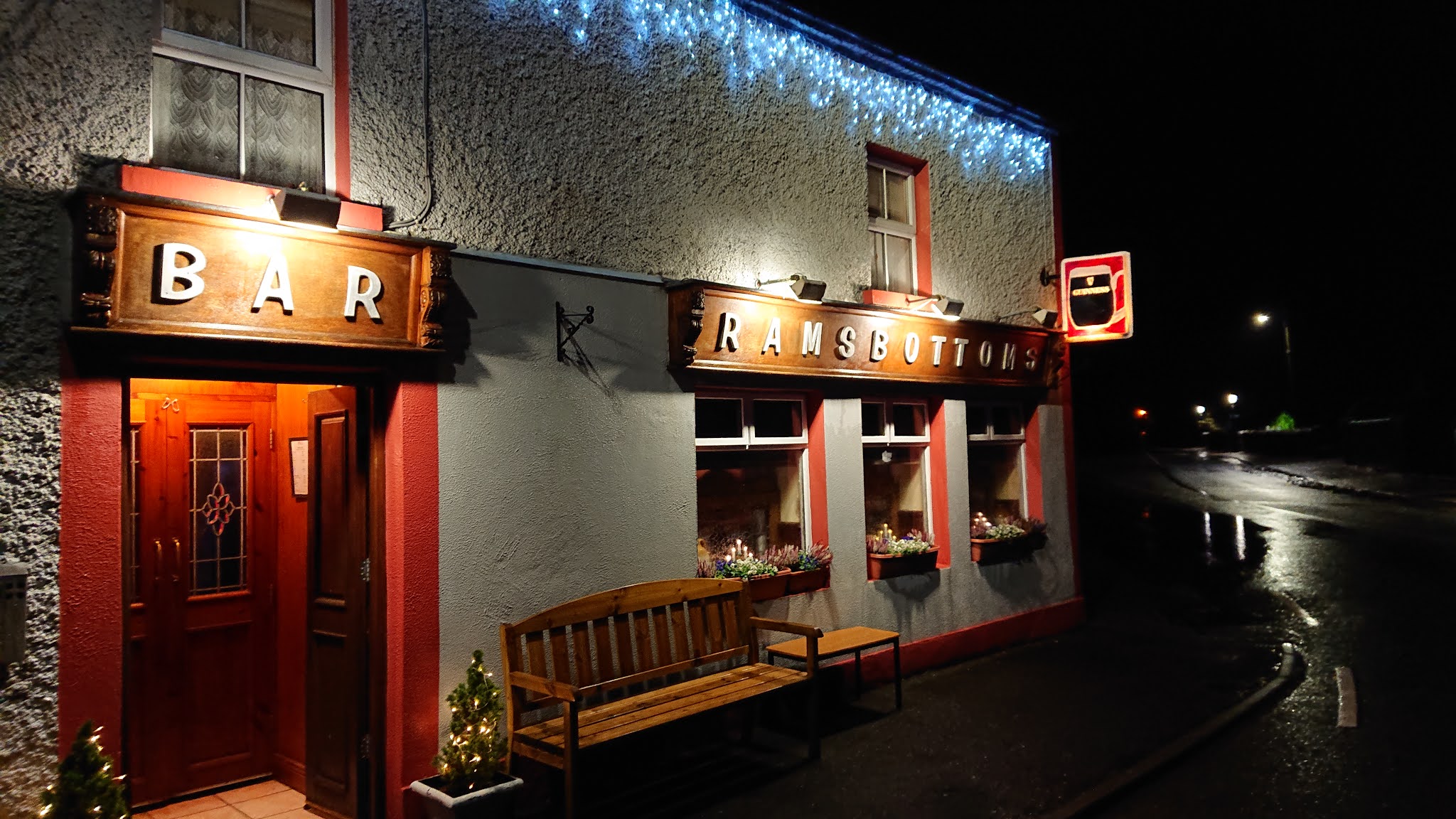 The World Ploughing Championships, for those who like that kind of adventure, are due to be hosted back in Ratheniska later this year from September 15 to 18, marking the 90th National Ploughing event and the 68th world championships. Fingers crossed.

Now, 5km is not a road trip by any measure, hardly enough time to defrost the windscreen properly on a hardy January morning. Yet it is amazing what we can conjure up and explore if we put our minds to it and it doesn’t all have to be a million miles away.

We are very fortunate with the lie of the land, the heritage and history and the accessible countryside within walking distance in our beautiful adopted village of Timahoe, here in the heart of County Laois.

However, we are not unique in that and such a privilege and opportunity to explore and enjoy the countryside is borne out right across the county. As if to make this point, LaoisTourism have recently compiled a list of walks within 5km of 14 Laois towns and villages.

Timahoe village itself (not to be confused with its namesake in Kildare) is 13km from Portlaoise with Ratheniska, Stradbally, The Swan, Spink, Ballyroan, Abbeyleix and Ballinakill its immediate neighbours. At the crossroads is the focal point of the spacious village green surrounded by the school, shop, pubs and community centre.

Centre stage though and commanding attention as it literally towers above all else is the splendid Timahoe Round Tower and adjacent heritage centre and library. They are across the road from a secure playground. The various authorities in Laois have to be commended for the number and standard of playgrounds in so many towns and villages across the county.

I never tire of visiting the Round Tower and its environs. It oozes a sense of history and it does feel like stepping back in time and off the treadmill of the daily grind. Your only noise and company here a cacophony of crows and the babbling Bauteogue River. It’s a sanctuary. 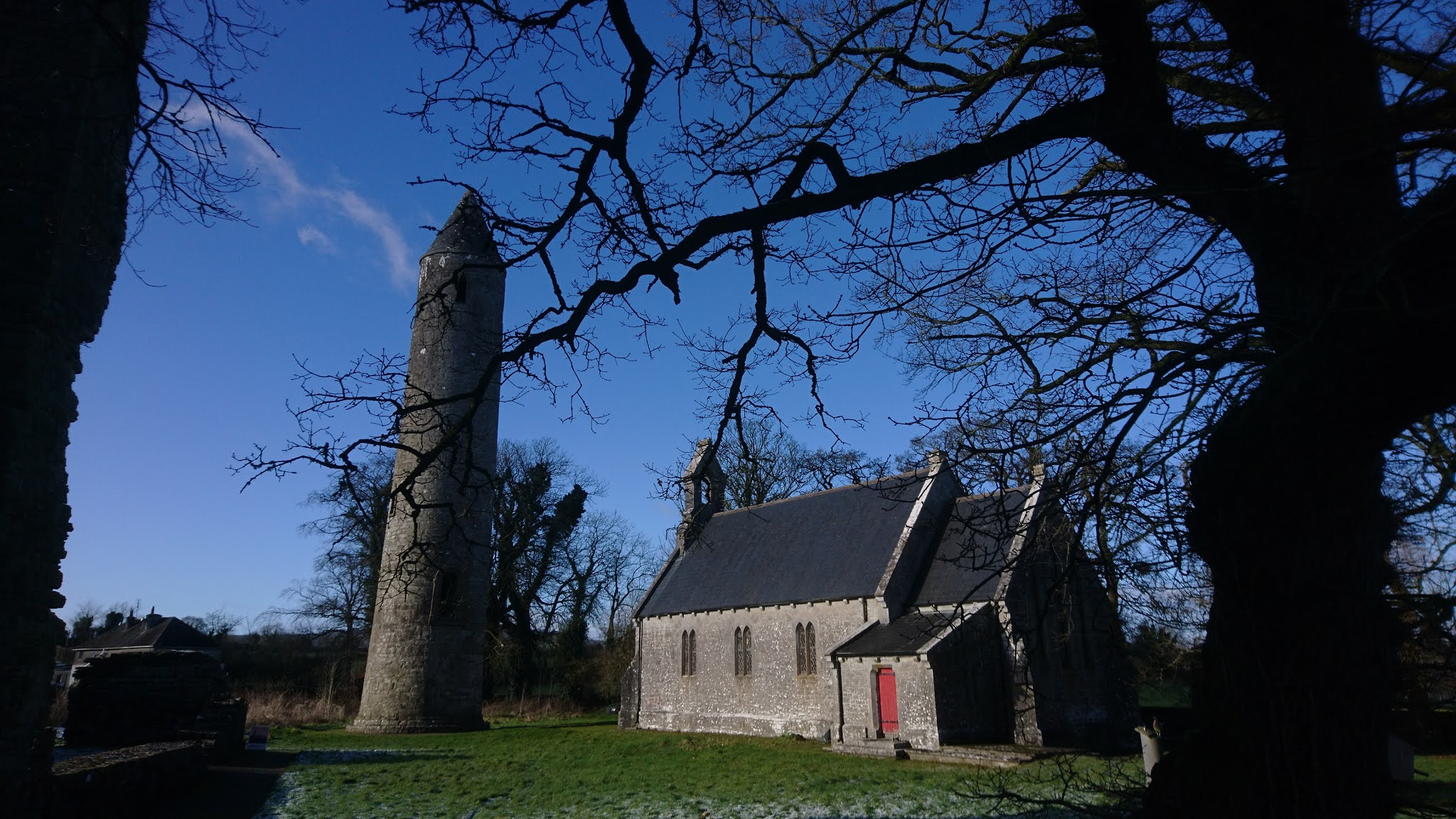 There is ample parking nearby around the green where children are free to horse about, or if they prefer in the safety of the enclosed playground.

Fancy some history and folklore? Then you have to seek out the local tour guide, Roghan Headen. His own family are steeped in the community and he carries on this tradition with an enthusiastic and encyclopaedic knowledge of the village and its hinterland.

The Round Tower is adjacent to the heritage centre, a former Church of Ireland, which found a new lease of life as the Willie Headon Memorial Library, a tribute to Roghan’s grandfather. 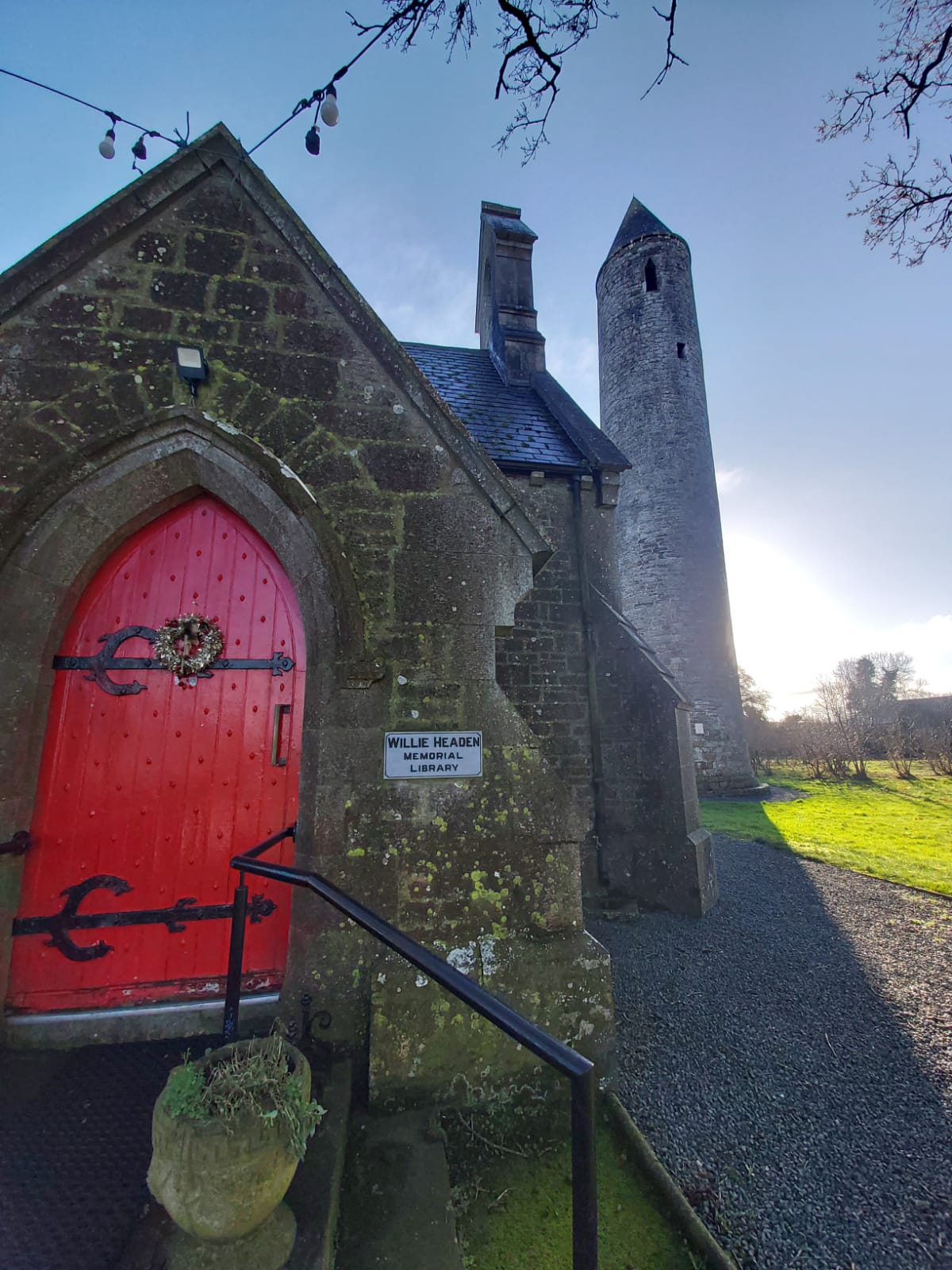 The Timahoe Round Tower is intriguing and every bit as significant as the more illustrious Glendalough.

It took over 30 years to construct in the 12th century, containing six floors, of ornate design in the Hiberno-Romanesque style; a monastic outpost established by the Augustinian Canons Regular who came to these parts on the invitation of the O’Moore’s, the chieftains who lend their title to Laois as the O’Moore County.

The site of the monastery dates back much further than that however, and can be traced to early Christendom and its patron St Mochua who died in the year 657 at the ripe old age of 99.

The monk from who the village derives its name is commemorated on the site with a charming art work of a rooster, a mouse and a fly, who are recorded as being his pets and companions.

Somewhat less innocent or devout is the reputed síle-na-gig or more accurately seán-na-gig purported to be engraved over the main doorway portal at the Round Tower. For my twopence worth this is the work of a mischievous stonemason set on exacting a cheeky indelible revenge on a tight-fisted abbot.

You can judge for yourself if you can locate this medieval graffiti carved in stone for all posterity and suffice to say that you will never have to ask what’s under a habit, cassock or kilt again, once you do!

Such is the extent of the rich monastic tradition in Laois it has recently been mooted that it would merit mapping and marking out in a Camino-style heritage trail to incorporate the likes of Sleaty, Killeshin, Timahoe, Oaughval, Clonenagh, Aghaboe, Kyle, Portnahinch and Kilmanman.

The full list would make for a long walk indeed. 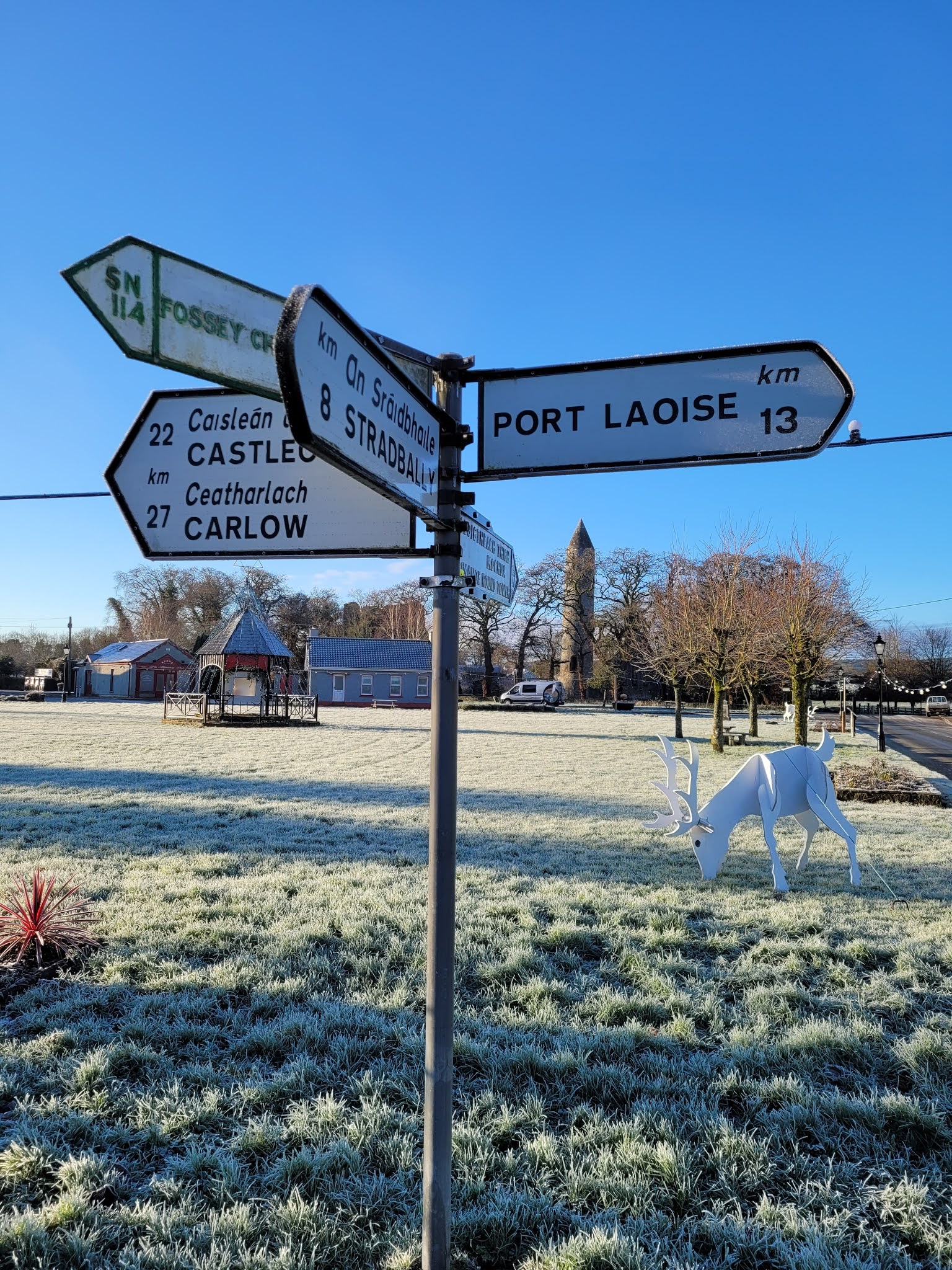 If walking is your pleasure then you need venture no further afield as Timahoe is a perfect staging post for a walk across Fossey Mountain, a 10km route if you fancy sticking by the marked way.

There are great panoramic views back down into the village and even longer hike if you head back up towards Luggacurran. There is another designated walk within the village environs along the geologically important Timahoe Esker.

On the Fossey Mountain route you will encounter the wonderful Fossey Mountain Springs Ranch, an opportunity for a Wild West experience and some pony trekking from this family-run enterprise.

Rodeo experts Michael, Esther and Cody Lacumbre will take you through your paces. A multi-talented family, Michael and Esther can trip the light fantastic and would mesmerise you with their rockabilly routines.

So there is a lot more to Timahoe than might at first meet the eye. When arriving in an area I’m always on the lookout for activities and things to do; some spacious and safe parking and places which can be relied upon for good food and refreshments. 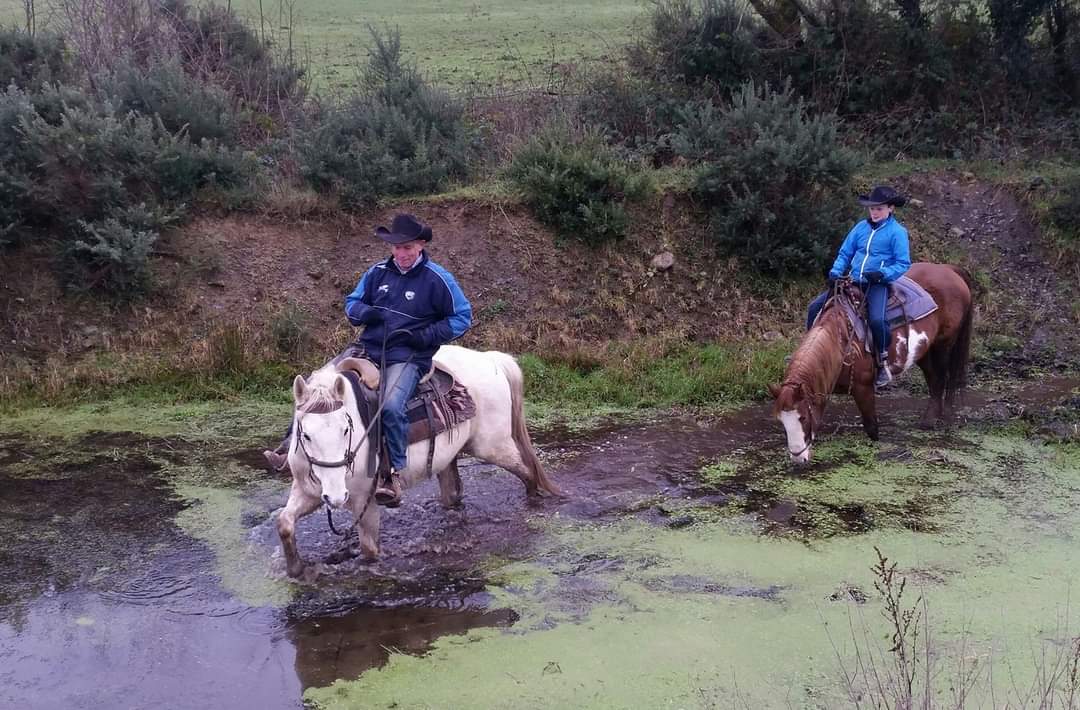 With this in mind I’m going to run through a few suggestions and recommendations within easy striking distance of Timahoe for you to choose from when you’re in these parts.

Nearby Stradbally of course home of the Electric Picnic each opening weekend of September but is also home to the National Steam Museum and a narrow gauge steam engine railway, which normally operates on bank holiday weekends, a favourite with all those young at heart.

Just out the road then is the Windy Gap and the Oaughval Forest Walk. In the opposite direction back towards Portlaoise is the iconic Rock of Dunamaise. It’s a must see. This Winter Solstice none other than Jack Lukeman was on hand to greet the stunning sunrise with an equally rapturous and apt version of ‘Here Comes the Sun’.

Ballykilcavan Craft Brewery, which does popular tours, is also nearby Stradbally and is one of the leaders in the craft beer sector, brewing from its own barley.

On the far side of the Rock of Dunamaise you come down into The Heath and the famed family hostelry and thatched tavern, Treacy’s of the Heath, which we can’t recommend enough.

It has lots of spacious parking as it remains a favourite stop-off for those heading up and down the country.

A few kilometres up the road then is Emo village, home to the palatial and fabulous Gandon designed Emo Court which was generously gifted to the State by Cholmeley-Harrison and the house and equally splendid gardens are open to the public free-of-charge all-year-round.

If you don’t spot a red squirrel I’ll give you your money back.

At the entrance gates to Emo Court at the cross roads in the village is the emporium that is The Gate House, Courtyard Cabin and Batonis Restaurant, whose delish menu would rival any of the swish Dublin joints. Treat yourself.

On the other side of the main road are the picturesque Vicarstown and Fisherstown villages.

Both on the banks of the Grand Canal and the work-in-progress that is the River Barrow Greenway, which heads down towards Athy and back up to Monasterevin and Rathangan. There is barge, bike and kayak hire available in Vicarstown with safe moorings and jetties from which to embark thanks to a newly formed kayak and canoe club. 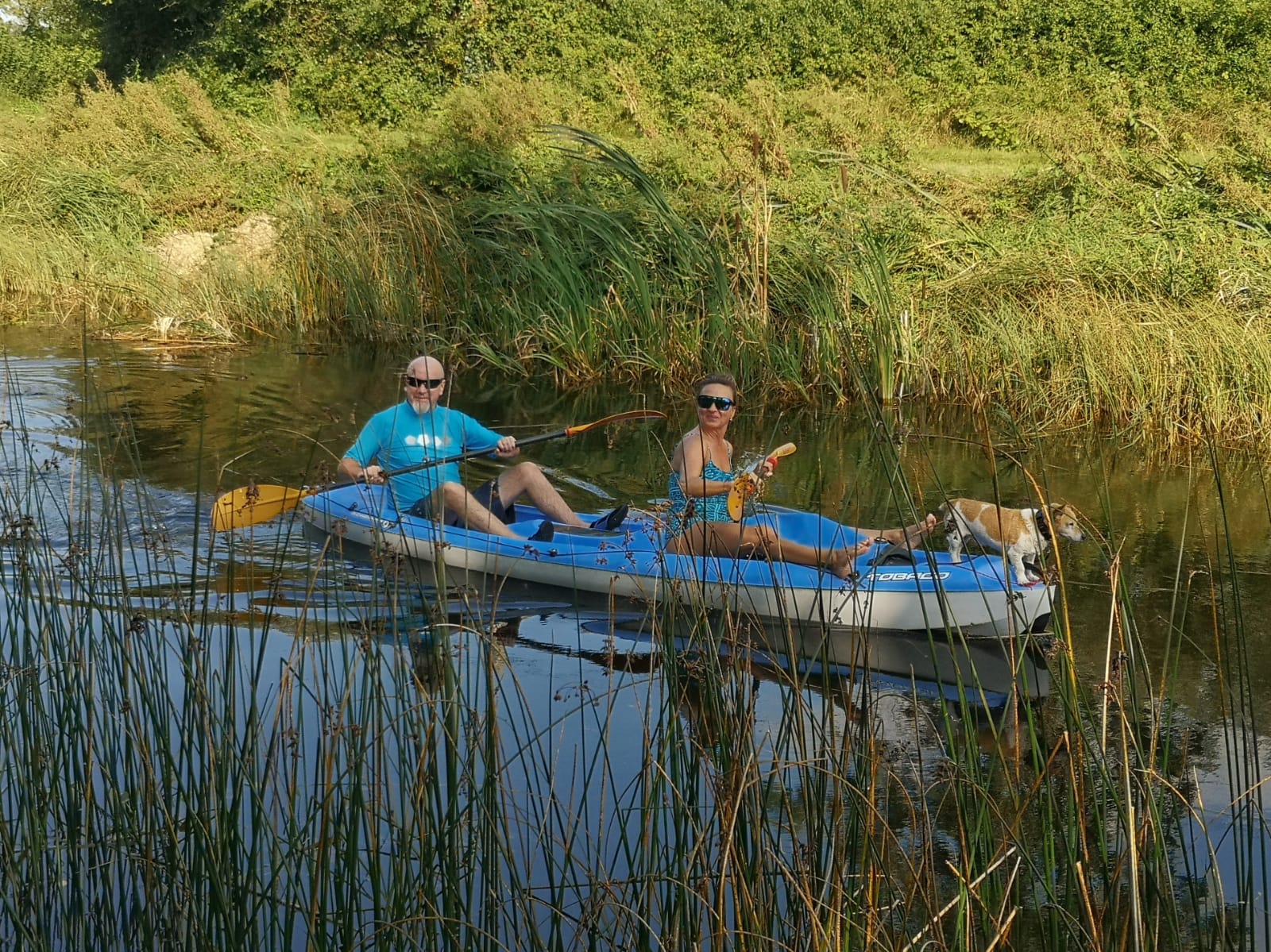 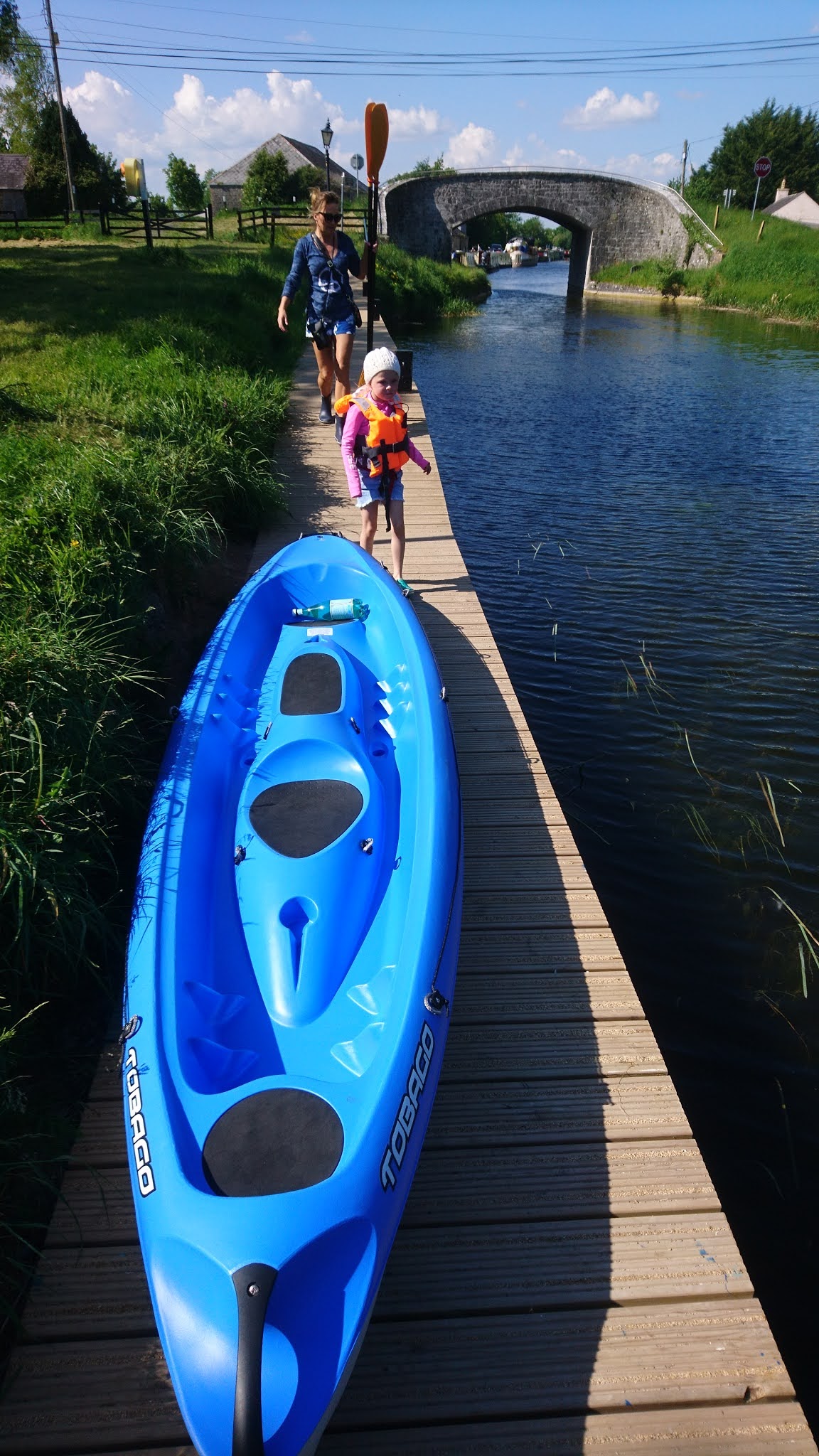 Using Timahoe as our hub the nearby opportunities for a visit out the other direction are the villages of Spink and Ballinakill and two of the loveliest towns in Ireland, Abbeyleix and Durrow.

Headon’s pub in Spink is renowned for its traditional music sessions and parking up at the nearby St Lazarian’s Church you can set out on the way-marked 9km Cooper’s Mountain Walk.

Ballinakill has something special about it as its main street opens wide to welcome visitors. It’s  home of the remarkable Heywood Gardens and the village uniquely boasts a heated outdoor public swimming pool which is being upgraded with other amenities also due to be enhanced.

The heritage town of Abbeyleix formerly part of the De Vesci Estate is a pleasure to stroll and in recent years has added the Abbeyleix Bog conservation project and walks to its list of attractions.

Don’t leave town without checking out Mueller & O’Connell’s scrumptious sourdough breads and other confectionary concoctions. They’re curiously located in the former bank on Main Street and are doing a roaring trade. They just knead a different kind of dough!

A further 10 minutes out the main N8 road and you’re in Durrow, home of the fabled August time Scarecrow Festival. Durrow just looks the biz and is breathing down neighbouring Abbeyleix neck as the county’s coolest town.

There is a new River Erkina Blueway under development here, which will have mooring for kayaks at the resplendent Castle Durrow, so that you can pop in for afternoon tea when you arrive down from Woodenbridge. If a pint is more to your liking then the vintage style Bob’s Bar which opens out on to the river, will hit the spot. It’s also a good place for tunes.

For the piece de resistance I have to insist that you visit Bowe’s Foodhall and Café where the food is only divine. Sit out back in the garden area if you get a chance and you’ll be joining none other than the bold Bono himself who is numbered among Bowe’s clientele.

Now aren’t you glad you stopped off in Laois!

That should be enough to keep you occupied for a weekend… or two.

John Whelan is the author of the popular camping blog, Vanhalla – Camper Heaven www.vanhalla.ie – and this piece was originally published there first.

SEE ALSO – John Whelan: The Slieve Blooms – a cut above the rest