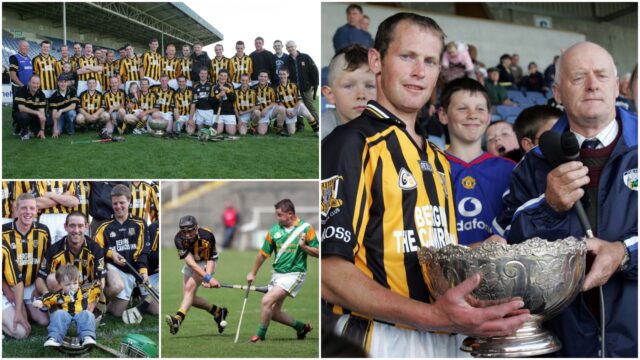 This week’s Remember the Game takes us back 15 years to when Camross faced Kilcotton in the Division 1 hurling final in O’Moore Park.

In 2001, Camross overcame Castletwon to claim Division 1 glory and they would have to wait five years until they would do it again.

Kilcotton had much more recent success in the competition as they tasted glory just two years previous as they beat Castletown in the decider in Rathdowney.

Three of Camross’ players were playing for Laois less than a day before the final and they had also lost their star player Zane Keenan as he got injured for playing with Laois a week earlier.

Camross disputed the fixing the match so soon after the Laois game but they were unsuccessful in their appeal.

Camross got off to a great start when Colin Delaney pointed directly from the throw-in. Kilcotton soon replied with a point from Robert Jones.

Camross then began to dominate the game and points from Damien Culleton and Dean Delaney put them ahead and in fact they would never lose that lead for the remainder of the match.

Camross then got their first goal of the game when Ken Cuddy found Dean Delaney and he smashed the ball into the net.

The final quarter of the half was a close affair as both sides had many wides. Both sides only managed a point each through Robert Jones and Fran Keenan which saw Camross take a five point lead at the break – 1-5 to 0-3.

Delaney continued to assert his dominance on the game as his got a brace of points in the opening minutes of the second half.

However, Kilcotton scored 1-2 without reply moments laters to reduce the deficit to three points – 1-7 to 1-4.

Camross made an inspired substitution in the final quarter as James Palmer replaced Pat Bergin in attack. Palmer made an instant impact. He received the ball from fellow substitute Greg Cuddy and put the sliotar into the back of the net.

Palmer then followed up his emphatic goal with two points in quick succession to push Camross further clear of their opponents.

Dean Delaney then wrapped up the game with a goal to see them clinch their 16th league title in 41 years.

SEE ALSO – Remember the Game: Smith stars as Laois down the Dubs on the way to last Leinster minor success in 2007