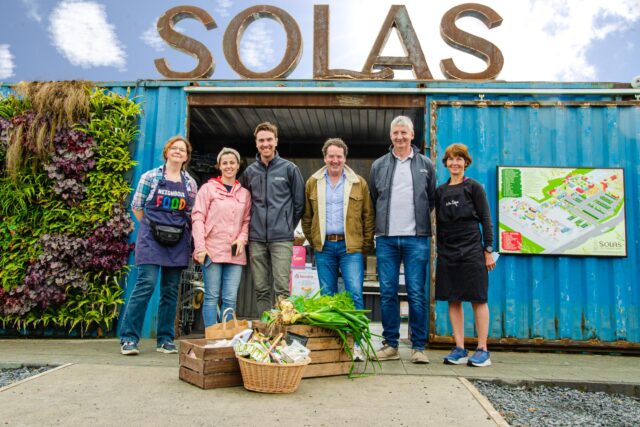 The SOLAS Farmers’ Market in Portarlington had a celebrity visitor last Saturday when leading garden designer Diarmuid Gavin dropped by.

David Maher of SOLAS (www.ecogardenshop.ie) explained: “I had emailed Diarmuid back in June after the SOLAS eco garden shop and farmers market had been covered in the Irish Times magazine.

“He texted me back to say he had seen the article and would make sure to visit us before the summer was out.

“So, I left it there and kept my fingers crossed, and true to his word Diarmuid phoned me last Friday to say would visit us to coincide with the farmers market.”

SOLAS co-owner, John Carey stated: “though we have done well on the press relations front since we opened in May with visits from not alone the Irish Times but also Bobby Kerr (Newstalk) and RTE (Nationwide which is to air in September) – for me the visit of Diarmuid Gavin was top of my list.

“After graduating with a horticultural degree from UCD I spent 5 years working as a landscape garden designer in the UK and I always viewed Diarmuid as an inspiration – someone whose talent and hard work had brought him to the pinnacle of the industry in the UK.

Maher continued: “Diarmuid viewed the various aspects of the development from the 40ft light tower, the retractable roof dome, the chicken coop, our food zone and the converted 22,000 sq ft warehouse.

“But undoubtedly the element he was most impressed with was the farmers’ market – simply due to range of products, the depth of the producer’s knowledge and passion for their products.

“You can feel it in the vibrancy and authenticity the market brings to the SOLAS each Saturday – it really has become a focal point for the community each week.

“It is great to see the huge buzz a visit like this brings to the traders and shoppers alike with endless photos being taken on the day.

“Diarmuid shared his experience of viewing other eco container developments in the UK and expressed the view that they only really work when the commercial aspects aren’t allowed overpower the design and ethos aspects.

“I believe this is a very important lesson for us to keep in mind as develop this project over the coming years – to keep true to our principles, to make a difference if we can”

In total the visit lasted for 90 minutes and included three separate hampers of local produce being presented to Diarmuid by the market stall holders – including fresh vegetables from Cormac and Tracy’s ‘Red Shed’ organic farm and a basket of cakes by ‘Cakes by Eimear’ Mathews and a combined super hamper from the other stalls collectively.

“The trip ended with a photo shoot and congratulations from Diarmuid Gavin to the SOLAS team on what they had built and a promise to visit again to record a piece for Diarmuid’s popular gardening podcast ‘DIRT’.

David Maher concluded “certainly the whole visit has left the whole SOLAS team with a pep in our step.

“But the hard work continues including this Wednesday night (25 August) we prepare to host a special invitation night for local hotels and tourist industry figures to try and work together to promote tourism in the Midlands – see full details www.ecogardenshop.ie/news/278-news-10  or call David on 086 3475357”.