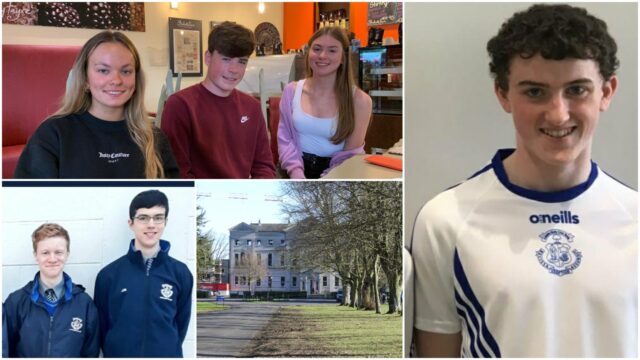 Two Knockbeg College students have received the maximum amount of points in the 2021 Leaving Cert.

Jack Ross and Finn Coss were both awarded 625 points on Friday morning.

Jack hails from Dolmen Gardens in Carlow while Finn is from Straboe, Grange also in Carlow.

Daire Brophy, who is also from Carlow, came in just behind the two lads with an amazing result of 613.

Meanwhile, three Vicarstown natives were also celebrating after bagging a seriously impressive 1,800 points between them.

Orla is hoping to study Occupational Therapy in NUIG while her cousin Oisin is looking forward to doing Computer Science in Trinity College.

Meanwhile, Bronagh is looking forward to studying French and Irish teaching in DCU. Both Orlagh and Clodagh are past pupils of St Colman’s in Stradbally while Oisin went to Rath NS.

They join a growing list of students in Laois schools who achieved stunning results today.

Finn Culleton of Mountrath CS was a happy man this morning as he achieved the maximum score of 625 – seven H1s.

For a school to have one student get maximum points in the Leaving Cert is a big deal – but Scoil Chríost Rí in Portlaoise are celebrating four 625-pointers today.

While eight Portlaoise CBS boys received greater than 600 points in their Leaving Certs.

There was history in St Fergal’s Rathdowney as Darragh Hogan became the school’s first ever student to receive a maximum score.